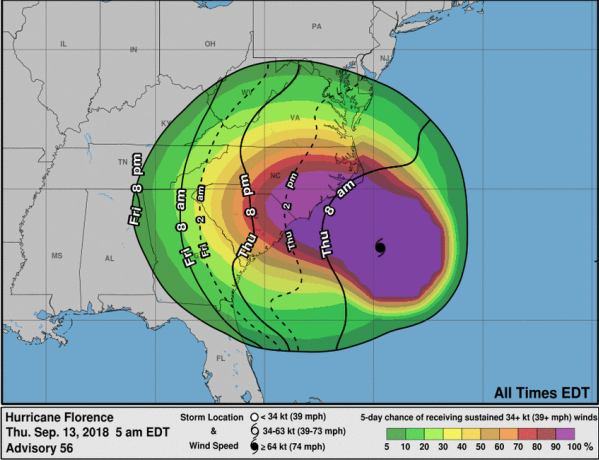 According to the National Weather Service (NWS), Hurricane Florence, now a category two hurricane, is expected to slow down at the North Carolina/South Carolina coast and make landfall early Friday morning.

“New precipitation amounts between a quarter and half of an inch possible,” the forecast cited.

Some heavy rain is expected to continue into Friday night with northeast wind around 16 miles per hour. Chance of precipitation is 80 percent. New precipitation amounts between a quarter and half of an inch possible.

Saturday is expected to contain showers with thunderstorms also possible after 2 p.m. Some of the storms could produce heavy rainfall, the forecast cited. Northeast wind around 16 miles per hour, with gusts as high as 25 miles per hour. Chance of precipitation is 80 percent. New rainfall amounts between a half and three quarters of an inch possible.

Showers are possible before 8 p.m. Saturday night, with a chance of precipitation at 60 percent. New precipitation amounts between a quarter and half of an inch possible.

Charlotte County and the region could also see effects of the storm into the weekend and early next week.

“Excessive rainfall is likely later this weekend and early next week as the remnants of Hurricane Florence turns north,” a weather advisory from NWS cited. “Plan for major flooding and potential power outages. There is also a slight chance for weak tornadoes Sunday and Monday associated with the heavier rain bands. General wind gusts may approach advisory criteria.”