The Charlotte County Board of Supervisors adopted a resolution with a 5-2 vote of support regarding Delegate James Edmunds’ (R) proposed legislation for sales tax revenue for school construction and improvements. 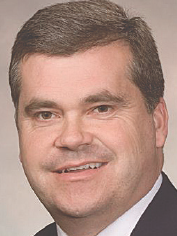 “Some of you are aware that our Delegate James Edmunds is proposing a bill that will increase the sales tax percentage and that, that percentage of the increase would be dedicated to school construction and improvement,” said Chairman of the Charlotte County Board of Supervisors Gary Walker.

He said the county has said for years they wished another option was available to finance county expenditures other than real estate and personal property taxes.

“It’s another tool in the tool box,” said Delegate Edmunds regarding the proposed legislation.

He said initially, there was a discussion in Halifax County regarding the need for a new school or renovations in the county.

However, Edmunds said there was no way with the current revenue based on real estate and personal property taxes to afford such an expensive endeavor.

Currently, he said the state does not allow localities to adjust the sales tax rate.

However, if passed, the proposed legislation will allow by referendum, localities to raise sales tax if needed for schools.

Edmunds said the rate would be set by the Board of Supervisors and if the tax itself is approved, would expire after 25 years.

He said he believes a sales tax is the most fair way.

Red House/Cullen Supervisor Nancy Carwile said she thought the Board should support any move to implement the proposed legislation, however, she said the locality should talk with legislators to make sure the conditions are not competitive and based on population or another factor.

“It’s been discussed for quite a while, it’s not going to be an easy thing to get through the general assembly but it’s before us for our consideration to send a resolution of support for his proposed legislation,” said Walker.

“The growing counties have an enormous need for school construction …” said Carwile.

Pierantoni said she thought it was too dangerous because money could be put into the towns and the towns often give money in to the school system.

“This sales tax is about having the money … generating more funds for schools, and all we will be doing is … possibly is in Charlotte County putting this tax burden on the citizens and the towns having more funds, so I’m very opposed to it in considering that,” she said.

“I’m not aware of any of our towns that run a school,” said Walker.

He said the towns could not take the money if they were not going to spend it on a school.

“You know that once this resolution gets down the pipe it could change …” Pierantoni said.

She pointed out that the resolution mentioned “sales tax revenue specifically earmarked for school funding would allow a locality to spend a local property tax dollars on such needed areas as public safety, school operating budget, and refuse collection and disposal …”

Additionally, Pierantoni said a sales tax is regressive for less fortunate people. She said if an individual is making $12,000, then everything the individual makes is going to be spent at 6 percent in sales tax.

According to the support resolution for consideration, “in 2013 the Virginia General Assembly approved a sales tax increase in certain localities for Infrastructure Development from 5.3 percent to 6 percent to relieve traffic congestion, making available billions of dollars of local funding for infrastructure …”

Additionally, the resolution said currently, the state of Virginia collects a 5.3 percent sales tax with 1 percent of the tax going to the locality, resulting in over $580,000 each year to Charlotte County.

Pierantoni said wealthier individuals would not be affected by the proposed sales tax increase as much.

“I just don’t think, with what we have right now, that we should be supportive of this in Charlotte County,” she said.