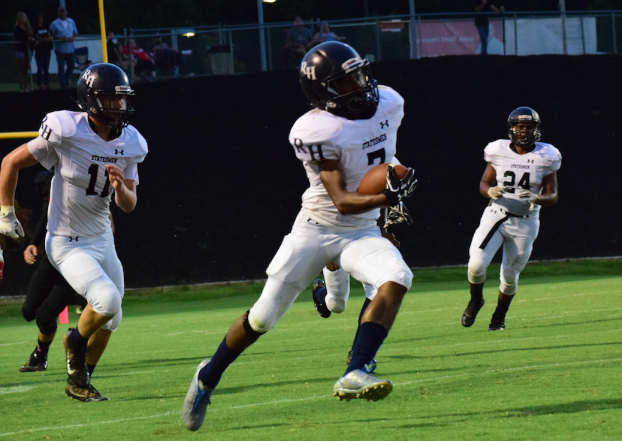 It was the second straight game in which the Statesmen were shut out in the first half.

“Obviously, we’re still having our issues,” Statesmen Head Coach Zach Orlando said. “We’re just not playing well in the first half, and by the time we figure out what’s happening, it’s just too late. I thought our guys played hard, but I thought we played extremely undisciplined on both offense and defense …”

The James River Knights were able to capitalize on key special teams plays.

“In the first half, when you have two punts blocked, you have a kick where they’re not really trying to onside it, and they still come up with it somehow — that kind of stuff just absolutely kills you,” Orlando said. “We basically, off of those three plays alone, we gave up three touchdowns.”

The coach took account of the positives and negatives going on in the Randolph-Henry program at this point.

Similar to their season opener Aug. 24 against host William Campbell High School, the Statesmen performed significantly better in the second half, outscoring the Knights 15-8.

“We just played,” Orlando said in reference to what changed. “That’s the biggest thing is we tell these guys all the time just to line up and play, have fun or just go play. They get to where they’re just thinking too much, and they’re over-analyzing everything that’s happening, and that’s the worst thing you can do as a football player is to start over-analyzing, because then you start playing slow …”

Randolph-Henry (0- 2) hosts Bluestone High School on Friday at 7 p.m. for its home opener.

Orlando said the Barons like to pass the ball, and on defense, they like to load the box and blitz.

Last week was a momentous and emotional one for Randolph-Henry High School’s (R-H) varsity golf team and its leader, Head... read more