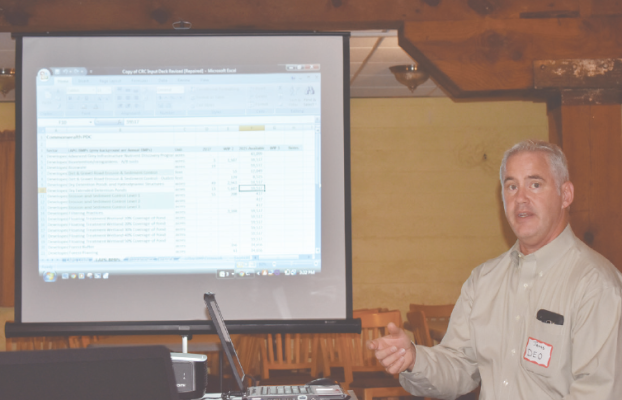 Members of the Commonwealth Regional Council (CRC), area planning and zoning directors and state officials learned about ways their counties can take part in keeping their area waterways free from pollutants during a meeting held at The Mill Room in Farmville Thursday.

While Charlotte County’s rivers and streams are not among those that flow into the Chesapeake Bay, the flooding that has occurred in Drakes Branch became a topic of discussion as CRC members asked if some of the state organizations that fund pollution reduction would also fund the town’s plan in moving its main street buildings away from the bodies of water behind them.

The watershed implementation plan is a non-binding item, meaning that the state cannot enforce localities to participate. Foster said the plan acts more like a wish list to justify funding needs to the Virginia General Assembly.

The council previously discussed participating in the watershed program after being contacted by VDEQ and hosting a previous meeting about the program earlier in the summer.

Cam Johnson, regional planner for CRC, gave an overview of the Virginia Department of Environmental Quality’s (VDEQ) third phase of its watershed implementation plan, which includes creating a Total Maximum Daily Load (TMDL) program for the Chesapeake Bay. The TMDL was designed to help implement restoration efforts to lower pollutions in the bay and surrounding rivers and streams. The VDEQ will submit the third phase of its watershed implementation program to the United States Environmental Protection Agency (EPA) later this year.

Regional localities can help with this effort, Johnson and Davis-Martin said, by creating Best Management Practices (BMPs), or efforts to reduce pollutants from entering area rivers.

On a regional level, rivers and streams that impact this study include the Appomattox River in Farmville, the James River’s course in Cartersville and Deep Creek in Mannboro.

Johnson compiled data from the DEQ’s 2017 findings for Cumberland, Buckingham, Prince Edward, Amelia and Nottway counties, which calculate and project changes in levels of nitrogen, phosphorus and sediment for each county of what the levels could be in 2025 and the sources of the pollutants.

Johnson and Davis-Martin said the estimates are not precise, particularly when asked about the high percentage rates of nitrogen, phosphorus and sediment caused by projected regulated construction. They said the percentages can be used as a guide, and for counties interested in participating, their efforts could help protect their rivers’ health and the health of the Chesapeake Bay.

“Water quality is important in the region,” Johnson said. “It’s important to be proactive in implementing Best Management Practices in the region that reflect the interest of localities and as a region.”

He said implementing these programs can have more than one benefit. For example, he said if a locality begins practicing street sweeping, removing debris or litter from roadways, he said this can improve water quality in addition to preventing flooding through clear storm drains.

Buckingham County Board of Supervisors District Four Supervisor Morgan Dunnavant asked whether a similar grant could be used for Drakes Branch flood study and subsequent plans to move buildings away from the flood site.

Foster said the town is in the process of submitting a grant application for the Virginia Department of Emergency Management (VDEM) Mitigation Assistance Grant Program, but said the CRC could consider the SLAF grant as an option as well.

CRC Deputy Director Todd Fortune noted that the program is operated by VDEM, but the grant funds come from Federal Emergency Management Agency (FEMA), and he said FEMA requires a 25-percent non-federal match.

“SLAF might be a possibility if the stream restoration project is designed in a way to both mitigate flooding and reduce nutrients,” Davis-Martin said.

“We will definitely do that,” Foster said about looking into the SLAF grant, saying the CRC has worked with Drakes Branch for more than a year in mitigating the flooding issue.

Fortune asked if SLAF is only eligible for areas specific to the Chesapeake Bay watershed, noting that Charlotte County is not considered in that area.

Davis-Martin said he believes the program is statewide.

A special called meeting of the Charlotte County School Board has been set for Sept. 5 at 7.p.m. to continue... read more