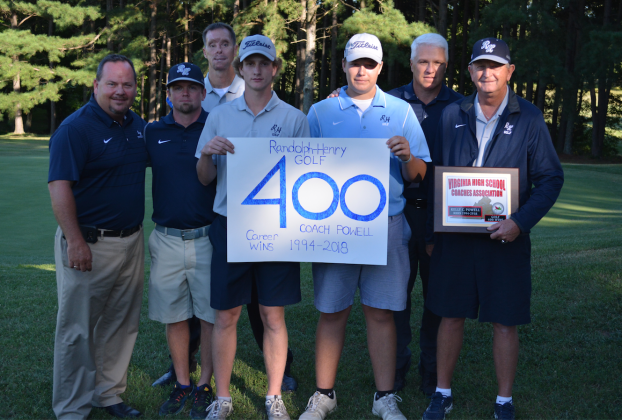 Last week was a momentous and emotional one for Randolph-Henry High School’s (R-H) varsity golf team and its leader, Head Coach Kelly Powell as an amazing streak ended and an incredible milestone was reached.

On Tuesday, Aug. 21, at Lunenburg Country Club, R-H’s district win streak that has lasted for 16 years was snapped at 198 as host Central Lunenburg High School shot a remarkable 160, and the Statesmen shot a strong 165. Goochland High School came in third with a 186.

“We didn’t give it to them, they earned it,” Powell said of the Chargers. “… After that match my team — it made me feel pretty good — they were pretty upset and showed a lot of emotion, and of course, I did too, but I think it took a little pressure off of us. I think you’ll see us play a little bit better now, because since August of 2002, we hadn’t lost a district match, and each team you have every year is thinking about that streak …”

Adding sweetness to the day, though, was the fact that it was also the occasion of Powell achieving his 400th career win as coach of the Statesmen.

This achievement was recognized Thursday in a brief ceremony after the Statesmen defeated both opponents in that match at Briery Country Club.

“It’s just been so much fun,” Powell said of coaching. “I’ve been coaching for 43 years — different sports at Randolph-Henry. I started out as a basketball/baseball/football coach, and then I’ve coached a little bit of everything over the years, but it means a lot. Just having seen the players and the coaches that have helped me and the parents and my whole family was there — my wife, my daughter, my son — and my son was on the first team I ever coached in golf. He saw the first victory, and he saw the 400th victory, which was pretty neat. And my granddaughter was there also, and the (athletic director) was there, the principal. It was just a bunch of people, a lot of parents, a lot of former players, coaches, Mike Adams was there. It meant a lot. It’s a milestone I’ll never forget, and I’m very appreciative of all the people who have helped me through the years.”

Statesmen improve to 8-0 on season