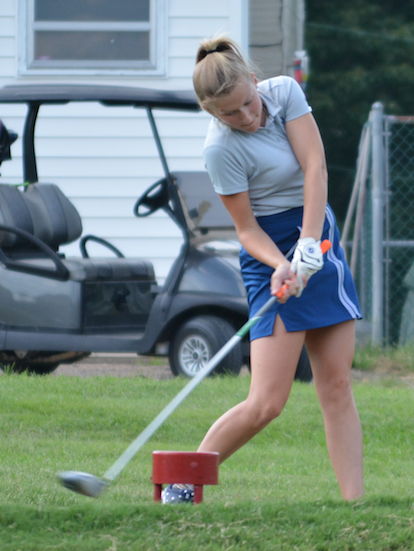 Randolph-Henry High School sophomore Jordan Colbert competes against Bluestone High School on Aug. 14 at Briery Country Club. She shot a 42 to be among the top four Statesmen individual scores in the match.

Statesmen improve to 8-0 on season

All four of the team’s opponents were from the James River District, pushing Randolph-Henry’s streak to 197 consecutive district wins.

“The 2018 Randolph- Henry golf team has been working hard, and all players are competing for playing time,” Statesmen Head Coach Kelly Powell said. “We are very young, and I am pleased with the effort of the entire team. Our senior co-captains, Larkin Jackson and Skylar Lacks, are showing great leadership skills and have a passion for the game of golf.”

On Thursday at Independence, the Statesmen produced a team score of 171, topping Goochland, which shot a 194, and Nottoway, which generated a 200.

Leading the way individually for Randolph- Henry was Lacks, who shot a 39. Brenden Francisco recorded a 42, and Jackson and Thomas Johnson each produced 45s.

The Statesmen shot a 161 on Aug. 14 at Briery Country Club while competing against Amelia and Bluestone, each of which shot a 190. The Raiders won in a playoff to earn second place.

Jackson was the individual medalist for Randolph-Henry, shooting a 38.

After Tuesday afternoon’s match against Central Lunenburg and Goochland, the Statesmen will host Cumberland and Prince Edward on Thursday, 3:30 p.m., at Briery Country Club.