Randolph-Henry High School will no longer offer theatre as a part of their instructional day curriculum for the upcoming school year, according to school officials.

“The plan is that we will not have a theatre class during the instructional day, but we will have a competitive theatre team as an extracurricular pending student interest,” said Superintendent of Charlotte County Schools Dr. Nancy Leonard. 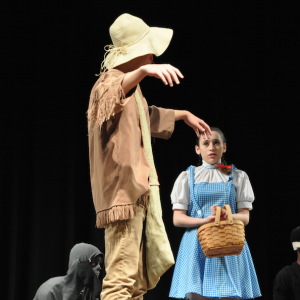 Joey Kelehar, Cole Pillow and Lizzie Powell perform
in a 2016 rendition of “The Wizard of Oz” at the
Randolph-Henry High School auditorium.

“The class is not being offered due to a lack of available space in the schedule,” said Randolph-Henry’s Principal Shep Critzer. “However, we are planning on offering the extra-curricular activity if there is sufficient student interest. We will be assessing that at the start of the year.”

Randolph-Henry High School Student Cole Pillow expressed his concern about the news. He said theatre is not just a class to him, but a family as well.

“It’s like a second home,” said Pillow. “Finding out that the students of Randolph-Henry will no longer have the option to take theater breaks my heart.”

He said theater is beyond the scope of an ordinary class because the skills learned can help students learn a variety of skills including bravery, how to be courteous, love and respect for each other.

“The class helps students with autism advance in public speaking as well as social interaction,” said Pillow. “Why take that incredible opportunity away?” he asked. “Our school has state of the art equipment at its disposal, but why let it go to waste?”

In 2012, the R-HHS Auditorium received a facelift.

According to April 5, 2012, minutes of the Charlotte County School Board, six bids were received at that time to renovate the auditorium.

The lowest bid was submitted by Coleman-Adams at $679,700, including an additional $220,000 for several alternative jobs.

“Coleman-Adams was awarded the bid for the Randolph-Henry High School Auditorium Renovation,” said the minutes.

According to Critzer, there are multiple other uses for the auditorium in addition to the theatre department.

“The band and theatre both use this space for practices and preparation for events,” he said. “This space is used consistently for large school functions such as convocations, class meetings, assemblies, eighth grade promotion ceremony, etc.”

Critzer said while the space is primarily used by Central Middle School and R-HHS, some annual events are held in the space, including the fifth grade promotion ceremony for Phenix Elementary.

Additionally, “the auditorium is used by community groups that are business partners with the division for different events as approved throughout the year,” he said. “There have been concerts, presentations and other events such as the Southside School of Dance’s annual dance recital (the proceeds from which go to the Randolph Henry Scholarship Foundation) and political debates that have been held in the auditorium through the years.”

“Someone who knows how to operate lights and sound is paid $20 an hour or more to work for outside organizations wishing to use our facilities. That’s an incredible opportunity for a student,” said Pillow.

Former R-HHS Theatre student Lizzie Powell said she started participating in theater in the fifth grade, however, she did not find her true passion until she reached R-HHS and worked under the direction of former theater teacher Deborah Bane.

“My time spent in theatre was something I’ll never take for granted. It was full of long practices, dress rehearsals, late night bus rides, a lot of tears, so many laughs and so much love,” said Powell.

She said being in college now, she has used more skills from theatre than in any other required class in high school.

“I feel that canceling the theatre program has taken something vital away from its students. It’s taking away somewhere where creativity can flourish, academics can improve and self-expression can be developed,” said Powell. “It just saddens me that R-HHS has just given up on something so important to its students. We must not forget the importance of having the arts in schools.”

She said there are many talented actors sitting behind desks and the latest equipped technology in the theater and sound booth is building up dust.