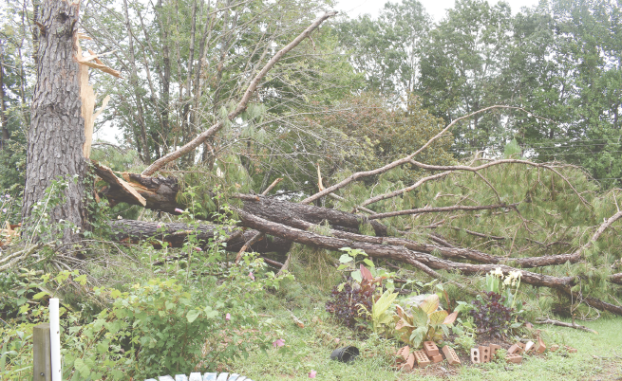 Pictured are trees that split and fell during a severe weather incident July 27 in the area of Taro Road in Cullen. Barbara Williams, who owns the home that saw the falling of the trees, said the trees fell on a collection of flowers she took pride in.

Barbara Williams, of Cullen, said she didn’t think what happened on the evening of July 27 could ever happen in her neighborhood. What started as a typical thunderstorm on the 1500 block of Taro Road took a sharp and frightening turn at approximately 11:30 p.m.

High winds and what sounded like a train freight thrashed the trees around her home. Williams said she moved into the bathtub and could do nothing but pray.

“I was asking the Lord, please have mercy,” Williams, who lived in her home for 40 years, said.

The incident caused several trees to fall in her front and backyard, crushing a few gardens she kept around her home. Shingles were also ripped from the roof, and cracked the window in the kitchen.

“I love a nice yard,” Williams said. She said a particular flower she was proud of, knockout roses, were blown away.

She said she remembered stepping out of the bathroom and seeing debris on the floor of her home.

She said since the incident, she is frightened and wary whenever another storm approaches.

During a recent storm, she wondered if she should drive and stay in another place.

“I was afraid to stay,” Williams said.

Trees around the area of Taro Road were also stricken, some split from the middle.

She asks the question whether this was more than a typical storm. Whether it was a tornado instead, and why there has been no involvement or concern from the community.

“Does anybody care?” William said. “Does anybody know what’s going on?” “Whoever thought this would happen in this little town of Cullen?” Williams said.

Tammy Goldman, who lives two houses away from Williams, said she was with her mother, who lives with her, during the storm.

“I had to catch my breath,” Goldman said in response to the thunder and wind. “It was an experience.”

She said while she did not sustain damage from the storm, she said she was concerned about the effects on surrounding properties.

Phil Hysell, meteorologist with the Blacksburg National Weather Service (NWS), which covers weather patterns in Charlotte County, could not confirm a tornado in the area July 27. He said a severe thunderstorm was put into effect the 27th in the late evening. He said the NWS received a report of trees down in the Phenix area.

He said effects on tornadoes, particularly on trees, are evident by the direction the downed trees are pointing, and whether the damage is along a narrow path or broadens with distance.

A process is underway to gather this evidence. Hysell recommended taking a map of the area and draw the pattern of tree damage on the map.

He said receiving reports from residents affected by storms helps the NWS, especially when a storm is taking place in real time and there isn’t a storm warning already in effect.

“That helps us verify our warnings,” Hysell said about residents’ reports. “And if we get those reports in real time, and we don’t have a warning out, we can issue a warning, and that will help save lives.”

Dollar General, located at 87 Hebron Church Road in Wylliesburg is seeing new progress with the installation of the metal... read more