The Drakes Branch Municipal Building and the Drakes Branch Volunteer Fire Department, located along the main street, have sustained heavy structural damage due to flooding. The town and Commonwealth Regional Council (CRC) are working to apply for a grant from the Federal Emergency Management Agency (FEMA).

Extensive flooding at the Drakes Branch Municipal Building, which also shares a building with the Drakes Branch Volunteer Fire Department, is generating concern and action through a potential grant with the Federal Emergency Management Agency (FEMA). 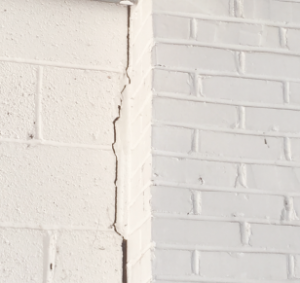 This photo shows cracking along the wall of the Drakes Branch
Volunteer Fire Department. Chief Kenny Tharpe said an engineer
notified the department that the building could potentially
be condemned within two years due to extensive flooding
damage.

A social media post from Drakes Branch Fire & Rescue cited that the department is raising funds to potentially build a new fire station in the town.

“Because of the close proximity of a creek and leaking storm drains under our building, our structure has been compromised,” the social media post cited about the flood damages to the fire department building. “Working closely with the town and other government officials, we have plans to build a new building out of the flood zone across the street away from the water issues.”

Drakes Branch Chief Kenny Thape said due to the damages at the building, he said it’s possible the building could be condemned within two years, according to an engineer who examined the building for the flood study.

Tharpe said the town was set to complete a downtown revitalization project from Virginia Department of Housing and Community Development (DHCD), but that the project was put on hold until the town performed a flood study.

“The cement floors are sinking, and the walls are cracking,” Tharpe said. He said the project was more than the fire department wanting a new building, but that the current building would not be sustainable over time.

Drakes Branch Vice Mayor Roscoe Eubanks said the flooding at the municipal hall and fire department building has been a persistent, longtime problem.

He said the town is working with the Commonwealth Regional Council (CRC) to apply for a grant from FEMA. 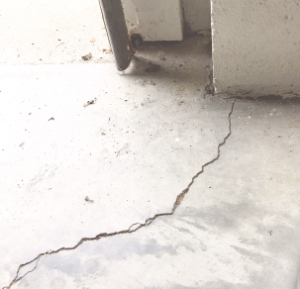 This photo shows foundational issues at a wall of the Drakes
Branch Volunteer Fire Department. The department and the
municipal building in Drakes Branch have seen substantial
structural damage due to flooding.

“The town is in support of the initiative and will … partner wth that initiative,” Eubanks said about the town’s participaton with the grant.

Noah Davis, councilmember with the Town of Drakes Branch, said a wall within the municipal building had to be jacked up approximately five years ago after they found the wall was settling.

Davis said the concrete at the fire station is cracking in the areas where the fire trucks are parked,

“The building is not going to last at the longevity we need it to last,” Davis said. “We’re between a rock and a hard place. We’re going to have a build a new building because of the flood damage.”

Davis said the grant from FEMA would allow the town to potentially tear down the existing structure and help fund a new building.

He said they are considering other grants, but that the grant from FEMA is currently top priority.

“We have to start from somewhere,” Davis said.

Commonwealth Regional Council (CRC) Deputy Director Todd Fortune said during the CRC’s meeting July 18 that he expects to have a call with VDEM and meet with staff of VDEM and DCR this week.

“What we want to do is get their feedback and have the consultant incorporate that into the report before we have our community meeting in Drakes Branch,” Fortune said. “That’s where things stand right now.”

Fortune said the initial goal was to present the plan in July, but said due to waiting for feedback from VDEM and DCR, the meeting may take place in August.

“We want to get this done sooner rather than later,” Fortune said.

The flood protection study is a part of the town’s revitalization project, which the CRC has offered assistance in conducting. A. Morton Thomas (AMT) was selected as the consulting engineering firm for the study.

Fortune said the engineering consultant compressed the timeline in order to give the town an opportunity to apply for a pre-disaster mitigation grant.

CRC Executive Director Melody Foster said the deadline for the engineering consultant was initially for November.

“He really compressed it trying to help the town out, to be ready,” Foster said.

Fortune said for the pre-disaster mitigation grant, the state is expected to have a deadline of October to submit applications, giving the town more time to prepare the grant application.

Fortune said the state is waiting on FEMA to release its notice of funding opportunity, which had not yet taken place as of July 18.

“Once that is issued that starts the ball rolling,” Fortune said.