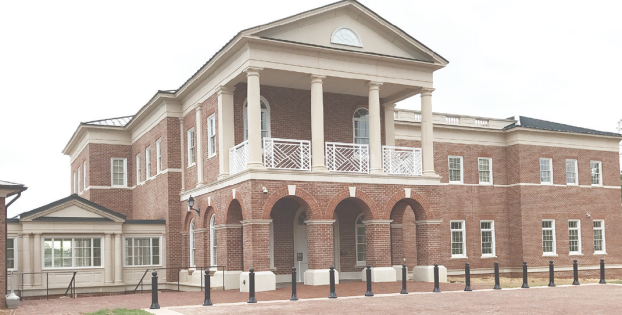 According to Chairman of the Charlotte County Board of Supervisors Gary D. Walker, the new courthouse opened for business July 9.

He said before the courthouse was opened, a mock trial was conducted to make sure all of the elements of the new building were working well.

“If you haven’t stopped by, stop by,” said Walker. “It’s a beautiful facility and hopefully it serves the citizens of Charlotte County for many years to come.”

Drakes Branch Supervisor Garland Hamlett, Jr. said he had a concern about the accessibility of handicap parking at the new facility.

“It has to do with the placement of the handicapped signs,” said Hamlett. “If you’re handicap, to gain access [to the building], you’ve got to go up a hill. If somebody’s in a wheelchair, that’s not very conducive to somebody with a disability.”

He said he would think the handicapped signs would be at the front of the building at the main entrance.

“There are four spots and I assume that they are designated for our judges?” questioned Hamlett.

Walker said while he did not have an official report to make, he said Charlotte County Sheriff Thomas D. Jones was recently at the new courthouse discussing sign placement and incorporating additional signs to make the process more understandable.

“That may be something that’s under consideration … I don’t have the answer to your question …,” Walker said.

However, he said there was a great deal of discussion about the matter when the courthouse proposals were being amended and the current location was a compromise.

“I don’t know that we can do anything to change it today …,” Walker said.

At a June meeting of the Charlotte County Board of Supervisors, Skanska’s Project Manager Tim Burge had estimated a scheduled move in date of July 2-3 for the new courthouse.

“The move to the new courthouse is scheduled for July 2 and July 3,” said Burge at that time. “We should be wrapping up in the next few weeks.”

At the July Supervisors meeting, Walker said furniture had indeed started being moved from the old buildings into the new building May 2.

An official dedication ceremony for the new courthouse has been set for September 23 from 4-6 p.m.

Red House Cullen Supervisor and Planning Committee Chair Nancy Carwile previously said there were talks of having the event in June, however, more time was needed.

“The county appointed a committee of one person from each district to advise the Supervisors on the planning, and the committee wanted to have more time for completion of the Courthouse before the dedication,” said Carwile previously. “Early fall was chosen to avoid hot weather and summer vacations, and to find a date convenient for more people to attend. The Supervisors appointed a good committee and their advice and planning went very well.”

Breaking and entering under investigation

The Charlotte County Sheriff’s Office is investigating a breaking and entering at Doss’s Store, 200 Ridgeway Road, in the Aspen... read more