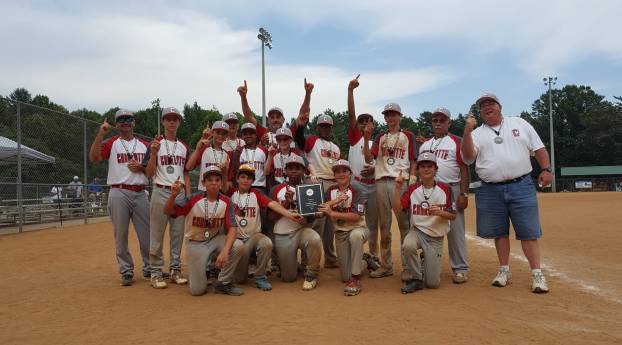 The Charlotte County 13U All-Star team had only one team to go through in order to claim the 2018 Dixie Boys Jr. Division State Championship, but the boys did so definitively, booking their ticket to the World Series starting Aug. 3 in Bossier City, Louisiana.

In the first game, which began at 9 a.m., Charlotte won 20-0 in five innings, with the mercy rule ending the game. In the second game, held at 2 p.m., Bedford was able to put some runs on the scoreboard, but Charlotte stood firm and prevailed 17-7, also in five innings.

“At the very first practice, I sat with the players and explained my expectations,” Charlotte Manager Trent Baker said. “I ask them to do four simple things: Give effort all the time, have a great attitude, be coachable and have fun! I told them if we do these four things we will win ball games.”

The coach praised Bedford for its sportsmanship.

This year, the Charlotte squad features nine players from Charlotte, two from Prince Edward County and two from Mecklenburg County.

Baker hopes to see participation grow significantly in the 13- to 15-year-old age range next year across those three counties.

Charlotte will begin play in the 2018 Dixie Boys Jr. Division World Series on Aug. 3 at 1 p.m. against a team from Spring Hill, Florida.

The Charlotte County 14U All-Star baseball team went 5-0 at the 2018 Dixie Boys 14U State Tournament that ran from... read more