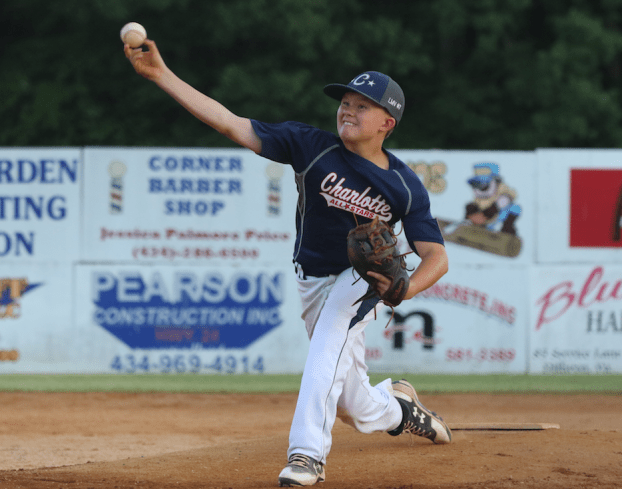 The Charlotte County Majors All-Star team continued to show the toughness at the state level that brought it a District 5 championship, but the squad ultimately was not able to get past the host Buckingham County All-Stars and their outstanding ace pitcher, Justin Gunter. Buckingham defeated Charlotte County 3-1 on Friday, the first day of the 2018 Virginia Dixie Youth Baseball Major League State Tournament in Dillwyn. Beginning after 10 p.m. due to a rain delay, the game was scoreless until Buckingham put two runs on the board in the top of the third inning. It added another one in the top of the sixth, and Charlotte County earned its one run in the bottom of the sixth.

“The boys didn’t quit,” Charlotte County Manager Gary Walker said of his players. “We stayed right in it. The boy just threw an excellent game.”

Walker’s team bounced back in a big way Saturday, routing the Hopewell All-Stars 17-0. Charlotte County’s offense generated 19 hits, including three home runs. Two of the homers came from Dru Lee. He went 2-for-2 on the day, hitting a threerun shot and a two-run shot, and he was the first player in the tournament to hit multiple home runs.

Charlotte County’s third homer came from Jaylon Gordon, who went 2-for-3, including the two-run shot.

Helping keep Hopewell off the scoreboard was Ben Gibbs and K.J. Eames with their play on the mound. Eames threw four strikeouts, and then Gibbs added six.

On Sunday, Charlotte County was in a scoreless stalemate with the Crewe-Burkeville All-Stars until the bottom of the fifth when, after stepping up in the batters box, Walker’s batters began to put the ball in play, leading to a 6-0 win.

Kanye Dailey hit a two-run homer in that game.

On Monday, Charlotte County faced Buckingham and Gunter again, falling behind 9-0. After Gunter left the game, they closed the score to 9-4 before ultimately falling 13-4.