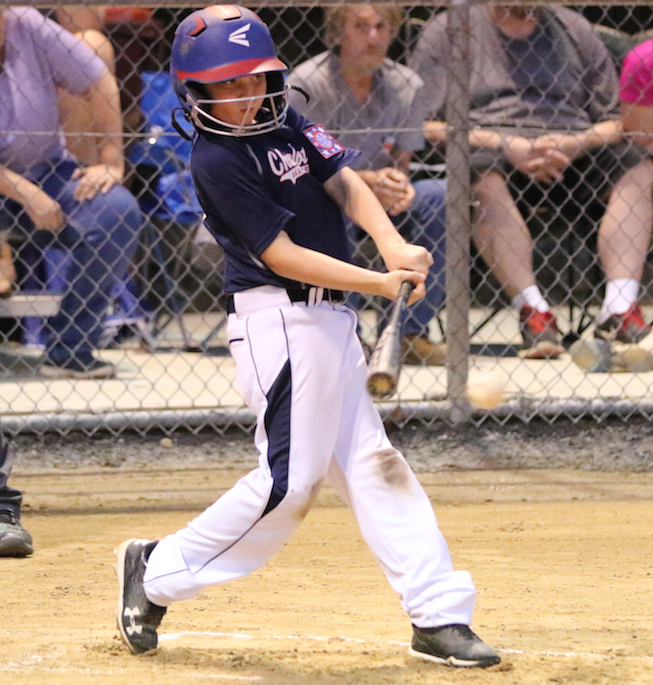 Charlotte County All-Star Kyle Vaughan lines up a hit for his team, which has continued to thrive at the state level.

The Charlotte County Machine Pitch All- Star team has taken its third-place finish in district play and made the most of its state berth, outperforming much of the state tournament competition to take a winning 2-1 record into its Tuesday evening showdown with the Blackstone All-Stars.

“The play in the state tournament has been much improved from the district tournament,” Charlotte County Manager David Evans said of his team Tuesday morning. “We’re constantly getting better. The kids, this will be their eighth game played together, and you can definitely tell they’re getting comfortable with each other.”

After rain prevented them from playing Saturday, the Charlotte County All-Stars edged the Appomattox County All-Stars 14-13 on Sunday in a nail-biter. “Our hitting has gotten stronger,” Evans said. “We’re hitting the ball a little better, and our fielding, we’re learning just to not throw the ball around (but rather to) make better decisions on the field throwing the ball. We’re all-around just more unified, just making smarter decisions with the baseball.”

“Last night was a much better game against them,” Evans said. “We actually went down big. We went down at the beginning 7-1, and the back half of the game, we actually outscored them, but we were just too far down to bring it back.” Charlotte County is now part of the final four teams remaining in state play.