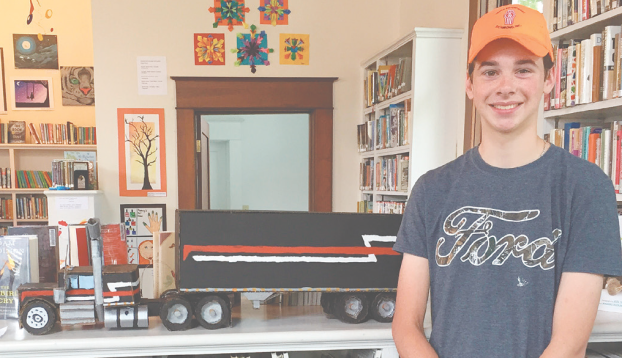 Pictured is ninth grade Fuqua Student Jayden Seagle with his Kenworth W900 at the art exhibit at the Keysville Library.

According to Friends of the Charlotte County Library member Margaret Elder, the exhibit will run until Aug. 1 and feature works from students of all local public schools in the county, including Fuqua.

She said the exhibit also features works from one homebound student.

She said the exhibit features several different styles of work, including two and three dimensional designs.

She said the purpose behind the idea was to give students an avenue to display their works and provide visibility.

“We don’t have enough art venues in our county,” said Elder. When asked if other art exhibits could be sponsored in the future, she said “I’m hoping that we will.”

Elder said hopefully smaller shows could be created to travel to all branches within the county.

Currently, the Charlotte County Library has branches located in Keysville, Charlotte Court House, Phenix and Wylliesburg, according to their website.

The main branch is located in Charlotte Court House.

Elder said Keysville was chosen as the location for the exhibit based on having a good space to display the works.

She said in the past, an exhibit for trained artists has been displayed; however, she would like to see a possible show for hobby artists in the future.

According to information from the Charlotte County Library website, The Charlotte County Friends of the Library was organized in 1989 and has provided support to local branches including money, the contribution of books, furniture, door mats, holiday decorations, flags and more.

While the Keysville Public Library is closed Wednesday and Sunday, the art exhibit can be viewed 10 a.m.-6 p.m. all other days of the week and 10 a.m.-1 p.m. Saturday.

According to Elder, the exhibit opened June 1 and will run for a total of two months.