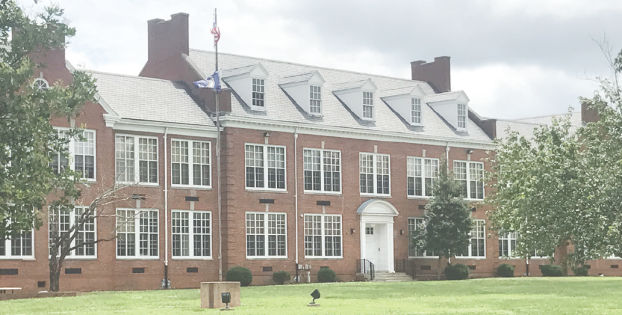 Visitors for the upcoming year at Randolph-Henry High School (R-HHS) can expect updated security measures at the main entrance with the installation of a security wall currently underway this summer.

Visitors for the upcoming year at Randolph-Henry High School (R-HHS) can expect updated security measures with the installation of a security wall currently underway this summer.

“The security wall is being installed,” said Superintendent of Schools Dr. Nancy Leonard. “It was designed to meet security needs but also to blend in with the beautiful architecture of R-HHS.”

Leonard said the goal of the new security wall is to prevent visitors from bypassing main office visitor screening procedures as they come in the front doors of the school.

“Entry into the classroom section hallway will be limited to staff who have assigned electronic key fobs or through being buzzed in by office personnel after proper screening and permission has been given,” said Leonard.

She said after visitors enter the main entrance of the school, the only option will be to enter the main office until access is granted to the remainder of the building via buzzer.

“The front doors are the only doors where visitors can enter the building and so this wall tightens security and reduces access to the classroom and hall areas where students and teachers are located,” said Leonard.

In addition to updated security measures, R-HHS has also been receiving restroom renovations before the start of the new school year.

“At Randolph-Henry, all the restrooms in the main building are being completely renovated and brought up to handicap accessibility,” said Leonard.

She said the cost associated with the security wall at R-HHS was included in the restroom renovations, however, she estimated $20,000 as the cost of the wall portion of the project.

In recent talks, school security has been a recurring topic regarding local schools in the county.

At a June meeting of the Charlotte County Board of Supervisors, a motion passed to allow a letter of intent to award a construction project in the amount of $3.2 million as supported by the School Board.

Additionally, the Supervisors approved to allow the School Board to post a PPEA Proposal up to $6 million, including all renovations to bring a 15 year life expectancy on the buildings.

“The scope of parameters of what we were looking for was what we could do to improve accessibility and security of our schools that would go beyond the $3.2 million but reach a $6 million cap,” she said at that time.

As a part of proposed renovations to Bacon District Elementary and Phenix Elementary, Leonard said security walls were being looked at for both elementary schools as well.

During the June meeting of the Supervisors, Phenix/Aspen Supervisor Donna Fore asked Leonard to describe how the security wall is constructed.

Leonard said at that time, depending on the school, the architecture could vary, however, the basics would require doors that remain locked and are electronically controlled by the main office to access the remainder of the building.

“Depending on the school … so for example, at Phenix, when the doorways are established as the main entrance, the person would be able to go into … a vestibule with doors in front, would have to turn into the office, check into the office, receive the proper check to be able to access those doors,” she said. “Those doors would unlock for them to go through.”

“So you’re kind of creating a waiting area for them to get buzzed in …” Fore said.

The R-HHS wall was designed by Dewberry Architecture.

At a June meeting of the Charlotte County Board of Supervisors, a motion passed to allow a letter of intent... read more