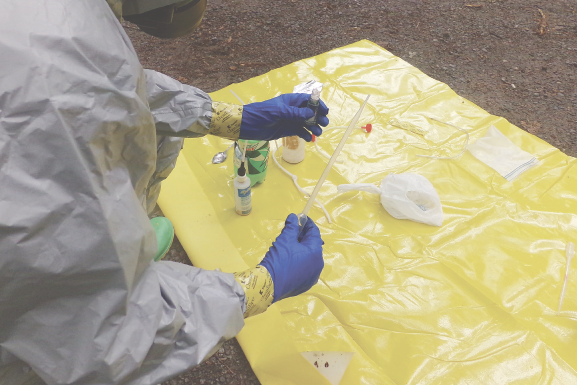 Investigators are pictured recovering items from a small methamphetamine lab at a Lunenburg shed. Wallace C. Gregory Jr., was sentenced to three years in prison for manufacturing meth.

A Lunenburg County man with a Keysville address was sentenced to three years in prison for manufacturing methamphetamine in a shed in Lunenburg. 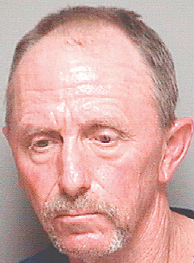 Wallace C. Gregory Jr., 53, of 1473 Owl Creek Road, Keysville, received an additional 12 years suspended upon conditions of good behavior, supervised probation upon his release for one year, warrantless searches, and counseling. This included a conviction of another felony charge of possession of precursors (substances) with intent to manufacture methamphetamine for the same incident, a release from the Lunenburg Commonwealth’s Attorney Office cited. Commonwealth’s Attorney Robert Clement cited in the release that Gregory’s offenses occurred on May 24, 2017, when Tri-County Drug and Gang Task Force with Virginia State Police representatives “Special Agent J.J. Lacks and Special Officer C.W. Wallace executed a search warrant at Gregory’s residence and found a small lab in a shed,” the release cited. “They found bottles of drain cleaner, cold packs with ammonium nitrate, tubing, a glass bottle of methamphetamine, lithium batteries of which some had been cut, salt and other items used to make meth.” Clement said in the release that Gregory admitted to making the meth for his own use, but not for sale.

“He said he used it every morning, making about one gram each time he cooked,” the release cited. “He said he learned to cook meth from the internet and television. He said he would sometimes get others to buy boxes of pseudoephedrine, a sinus medication, which is a key ingredient for making meth. Such medication can be bought without a prescription, but is limited as to how much a person can buy at a store and must be signed for by the purchaser.” Clement said in the release that making meth is an extremely dangerous endeavor, often deadly. Gases can escape and incapacitate a person almost immediately, leading to death. Law enforcement personnel have to follow strict procedures and wear chemical hazard-gear to even collect samples from a lab. The release cited that Gregory had past convictions in Chesterfield County for possession of precursors to manufacture meth in 2016, but received only a six-month suspended sentence; stalking in 2015, trespassing in 2015 and possession of schedule II drug in 2016. “Due to the dangers associated with meth and the highly addictive quality, the sentencing guidelines are higher than for other class II drugs like cocaine,” the release cited. “This resulted in a mid-point for Gregory of three years and two months.”

The Town of Drakes Branch could see the addition of a new 1.6 MW (megawatt) AC (alternating current), 11- acre... read more