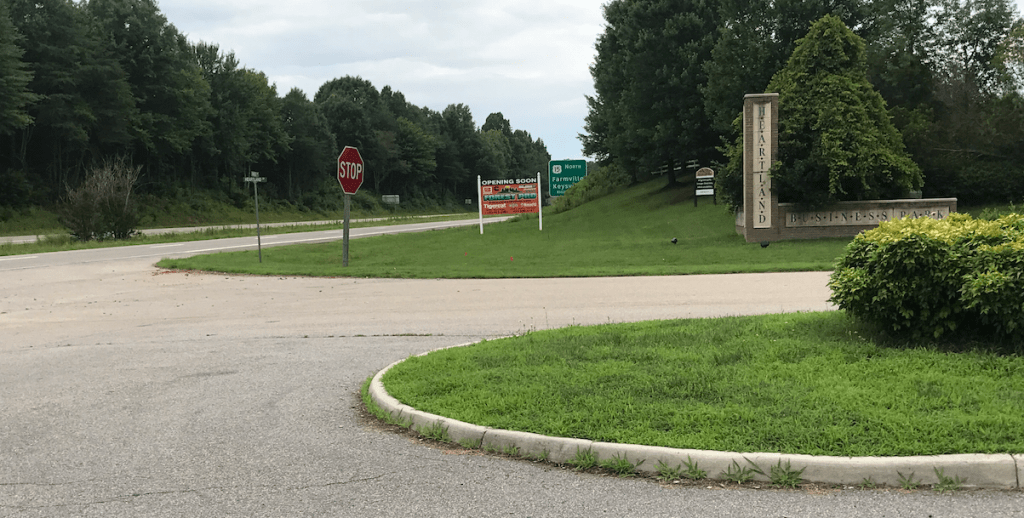 The entrance at the Heartland Regional Business Park in Keysville could soon see a facelift as a part of a SMART SCALE project to construct an entrance, including left and right turn lanes.

Plans are in the making to construct an entrance to the Heartland Regional Business Park, located at 200 Heartland Dr. on Route 360 (Kings Highway) at Route 812 in Keysville.

The entrance will also include left and right turn lanes. VDOT’s Lynchburg District Communications Manager Paula Jones said the project was originally submitted in round one as a SMART SCALE project with a projected cost of $771,497.

“Since that time, VDOT, in consultation with the county, has streamlined the original project to provide a scaled back, less costly version of the project that focuses on safety improvements that meet current needs, while providing components that could be incorporated into future improvements,” said Jones. “These changes will allow this project to be completed sooner and at a savings of approximately $600,000.”

VDOT advertised their willingness to hold a public hearing concerning the matter, in which written requests were due June 20.

During a June meeting of the Charlotte County Board of Supervisors, Red Oak/ Wylliesburg Supervisor Kay Pierantoni said a citizen had mentioned to her about the willingness from VDOT to hold a public hearing regarding the matter.

“People in my district would like to have a public hearing about that,” she said at the meeting.

At that time, VDOT’s Resident Engineer Scot Shippee said VDOT’s Lynchburg District Office would have to be contacted in order to make the request.

Shippee said the plan set is available from the District for review. “If we need to go further than that we can,” he said. “It’s just typically a lot cleaner to do it this way on these smaller projects.”

One of the reasons for going with the willingness portion was to try and accelerate the project.

“That’s actually one we’re gonna build with state forces at a considerable savings over the initial project cost,” said Shippee. “We can certainly do whatever we need to there.”

Jones said “one request for a public hearing was received, however, that request was rescinded once the requester had an opportunity to talk with (the) project manager about the design.”

According to the SMART Scale website, the SMART SCALE funding is geared toward making sure tax dollars are invested in critical transportation needs.

The Heartland Business Park in Keysville is a 773 acre regional business park with industrial zoning classification.

The park hopes to attract future businesses to the area.