The third annual Grand Ole Setting at Central High Museum Saturday offered a message to get involved, and promised that the school’s legacy in the county would not be forgotten. 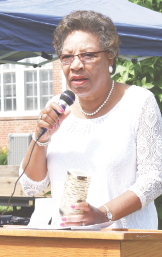 Thelma Jones with Central
High Museum lights a candle to
remember former students who
have died during the third annual
Grand Ole Setting.

The event from 10 a.m. to 6 p.m. allowed participants to explore the Central High Museum, offered grilled hot dogs, hamburgers and fish, held a car show, games and a bouncy house for children and bingo with prizes.

Participants could sign up to vote at a voter registration stand, and representatives offered resources for people seeking to vote, saying house visits could be available for people with limited mobility.

The museum is the site of the former Central High School, which had been an all African-American school until integration in the mid-1960s.

The event began with songs led by the Salem Baptist Church junior choir.

Dr. Hezteine Foster, president of the Central High Museum, spoke about the importance of being involved, voting and looking out for members of the community.

“As we celebrate this grand setting, let us remember the trials and the struggles that we have had, and our foreparents have had trying to make this world a better place for which to live,” Foster said.

“Ladies and gentlemen, the struggles are not over,” Foster said.

Nancy Carwile, Cullen/Red House representative of the Cumberland County Board of Supervisors, spoke about the importance of this event.

“This is a time to remember the past, the present and the future,” Carwile said, speaking about past grand settings. “The crowd is smaller. There are fewer events. But we remember it because what do you think our parents and grandparents would think if they could see us now? Look at us now.”

He noted that Central High School, Central Junior High School, an early learning center and currently a Head Start facility are among the education centers that have been housed inside of the building, located at 401 Thomas Jefferson Highway.

He said the center has been instrumental “in our educational history that continues to serve this community by being part of the education of our youth.”

Haskins is a Charlotte County native who was in the last ninth grade class at the Central High School building.

“Education is a fundamental right of all U.S. citizens, regardless of race or origin,” Haskins said, which led to members of the audience applauding.

“Education may be the most valuable possession you will ever acquire,” Haskins said. “Other possessions can be and will be taken from you at times. Education is yours to keep once you have earned it.”