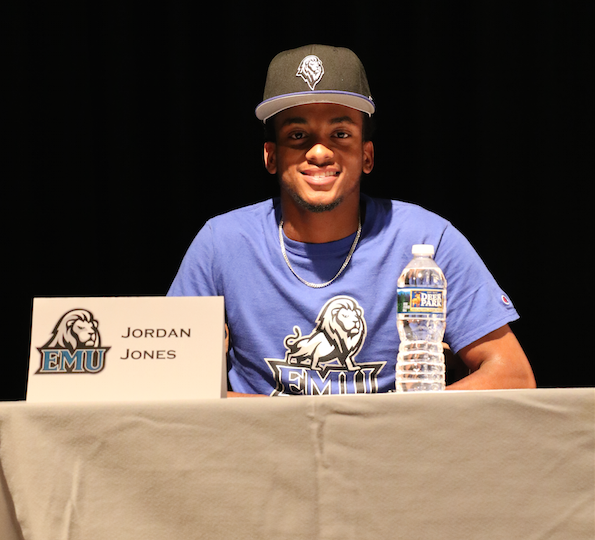 Randolph-Henry High School senior Jordan Jones smiles for a photo at the signing ceremony where he formally announced he would be playing baseball for Eastern Mennonite University.

Jordan Jones is going to be wearing the familiar colors of blue and white on the diamond in college. During a signing ceremony this spring, he formally committed to play baseball for Eastern Mennonite University (EMU), a Division III school that plays in the Old Dominion Athletic Conference.

Jones expressed excitement at the achievement marked by the ceremony.

“It meant a lot to me, because I worked really hard since I was little just to have this dream, and it finally came true through all the hard work that I put in,” he said.

He said that he has had the dream to play college baseball since around the age of 10.

“At first when I was younger, I really didn’t think I was going to be able to do it, but once I got older and realized how good I actually was, it just made me work hard and go for that dream, set that goal,” he said.

Jones starred on the hardwood for the Statesmen this past season, and he revealed that basketball was his first love “until I realized that baseball was what I really loved.”

He got his start on the diamond through Charlotte County Dixie Youth Baseball.

He has since played on travel ball teams, including the Evoshield Seminoles and the Richmond Braves.

Jones had some other collegiate options he was considering in addition to EMU — Roanoke College and Randolph-Macon College.

But the Royals’ coaches are what gave EMU the edge.

“They showed that they cared for me as a player and just as a person,” Jones said. “They just made it feel like home and where I would be most comfortable for the next four years.”

He said they are going to use him somewhere in the outfield, which is where he has always played.

In the classroom, “I’ll be majoring in sports and recreation studies,” he said.

Identifying those who helped him get this far, he said, “First of all, definitely my parents, because if it wasn’t for them, this opportunity wouldn’t be possible. (They were) taking me to practices, waking up early in the mornings for tournaments on the weekends, just taking time out of their day just to help me. And second of all, the coaches that helped me. They really helped me a lot in developing my game just to get to where I am.”