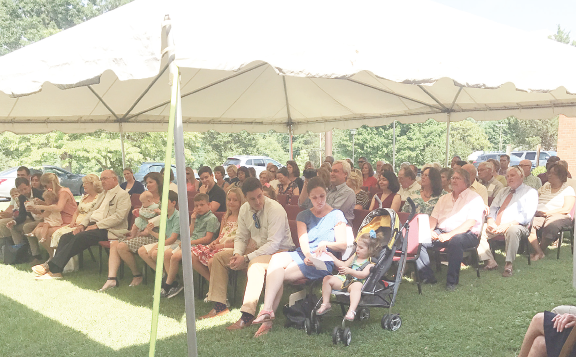 Family, friends and co-workers gathered on lawn of the Charlotte County Administration Building to honor R.B. Clark during his retirement ceremony Monday evening. 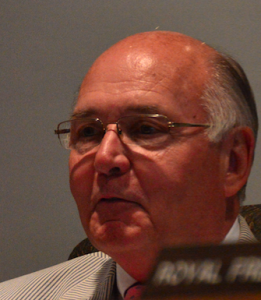 “I know there were many nights when you all would’ve liked to have had him home …” said Walker.

He said Clark missed a lot of family activities in the pursuit of his willingness to serve.

“You all sacrificed so much so that R.B. could serve Charlotte County like he did,” Walker said.

Sheila Bradley, Representative for Delegate James Edmunds, said although Edmunds could not be in attendance, “I am honored to represent him today …”

“I’ve known R.B. for … probably 20 years …” said Bradley. She said Edmunds introduced a resolution to honor Clark on his retirement.

The resolution said Clark was the second longest serving County Administrator in the Commonwealth.

The resolution also said after his retirement, Clark plans to spend more time with his family, including his 5 children and 15 grandchildren.

Representative for Congressman Tom Garrett, Matthew Becker, presented Clark with a flag in his honor.

“This flag was flown to recognize the outstanding service of Mr. Russell B. Clark, Jr. as County Administrator of Charlotte County, Virginia …” Becker said.

Charlotte County’s Sheriff Thomas D. Jones said Clark has always been a good friend and he was going to miss him.

In order to show his appreciation, Jones presented Clark with a special plaque from the Charlotte County Sheriff’s office highlighting his outstanding service to the citizens of Charlotte County.

Howard said Clark is a very compassionate individual and “during that time, R.B. has provided us with sound advice and wise counsel. He’s been an anchor to our bank through the ups and downs of what any business goes through.”

The initial announcement of Clark’s retirement occurred at a February meeting of the Charlotte County Board of Supervisors.

“Ladies and Gentlemen of the board, I’m going to make the announcement today of my planned retirement for June 30 at the end of the 2017-18 fiscal year, said Clark in February.

He said he worked for 37 years in public service as the Charlotte County Administrator.

“And believe it or not, a total of 44 years in public service if you count the seven years I was with the school division,” he said.

He has served as the only County Administrator of Charlotte County since 1981.

Currently, The Berkley Group of Bridgewater is underway with the search process to find the next County Administrator for a base price of $20,000.

While the pricing will not be a flat $20,000, Keysville Supervisor Butch Shook said the search would more or less be conducted within a 200 mile radius of Charlotte County.