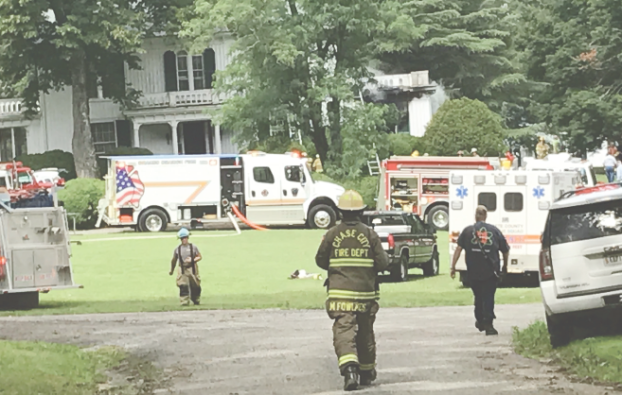 First responders gather at the front lawn to respond to a structure fire at a historic property at 412 Arcadia Lane.

More than 10 fire departments worked for several hours to contain a fire at a historic home in Charlotte Court House Tuesday.

The plantation was built in 1847, documentation from the Virginia Department of Historic Resources cited.

Russell said the incident was called in by passerby’s who saw the fire in the building. He said no occupants were at home at the time of the fire.

He said the Charlotte Court House fire department received the call of the fire shortly after 8 a.m., and said the fire was reportedly clear at 3 p.m.

“It was a very difficult fire to fight,” Russell said, noting that the house’s structure and the humidity affected many of the firefighters and made it a challenge to contain the fire. “Very difficult, used a lot of people, very tiring. That’s why we needed so many companies.”

Russell said he estimated that departments used approximately 10,000 gallons of water to douse the fire.

He thanked the different departments for their service, saying the house is currently repairable due to their efforts.

“We couldn’t have done it if everybody else hadn’t showed,” Russell said. “We would have lost the whole house.”