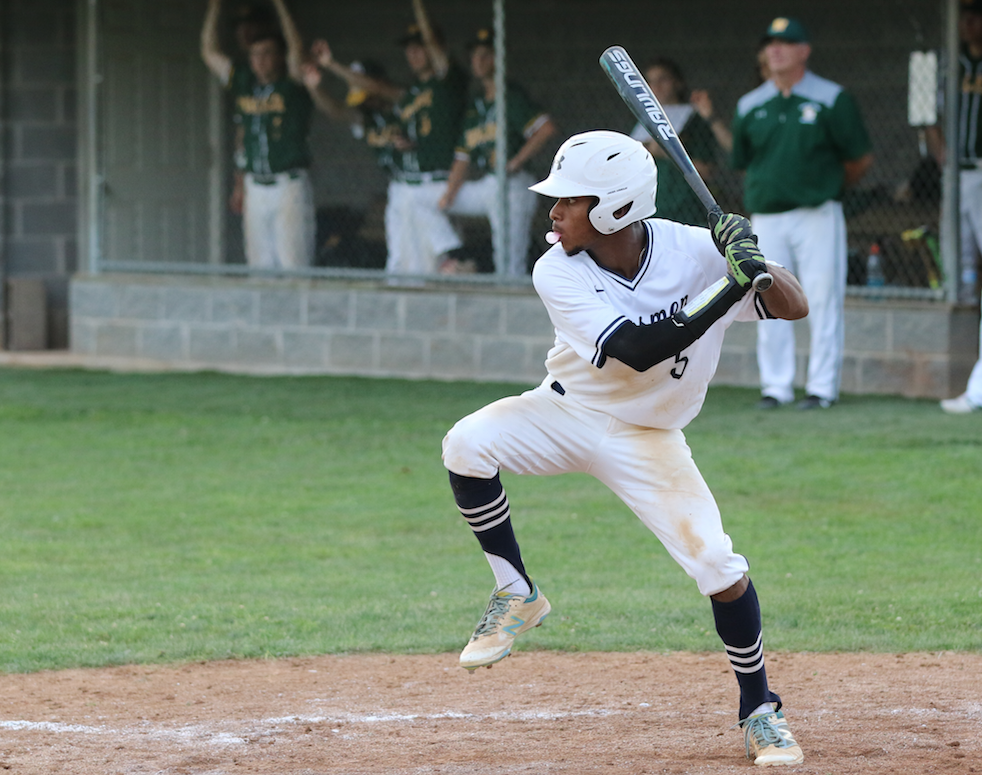 Randolph-Henry High School senior Jordan Jones braces for a possible hit against visiting Maggie Walker on May 30 while blowing a bubble with his gum.

Randolph-Henry High School’s varsity baseball team endured a heartbreaking finish to its highly successful 2018 campaign May 30 in the Region 2A tournament semifinals.

“I thought we came out strong and executed almost to a T,” Statesmen Head Coach Josh Barmoy said.

He noted that host No. 1 Randolph-Henry produced runs early, giving it a 5-0 lead over Maggie L. Walker Governor’s School, the No. 3 seed from the other side of the bracket. Barmoy added that his team played great defense, and senior Carter Strickland “threw a heck of a game.”

“Things were going exactly the way we had planned,” Barmoy said.

Strickland began tiring after having thrown about 91 pitches. Barmoy opted to bring junior Skylar Lacks to the mound with the score at 5-2.

“And when we brought him in, he just didn’t have it that night,” the coach said, adding that “some of the guys behind him didn’t make some plays that could have helped …”

The Statesmen managed to score in the bottom of the inning with two outs, but ultimately lost 10-7.

Barmoy made it clear that it was a team loss rather than one individual’s, and he offered unwavering praise for Lacks, who was assigned the pitching loss.

“I have a hundred percent confidence in Skylar Lacks, and if I had to do it all over again, I would give him the ball in the exact same moment,” the coach said.

Lacks proved clutch time and again on the mound throughout the regular season and looks to be a key leader on next year’s squad.

Randolph-Henry had a first-round bye in the tournament, and in the quarterfinals, the Statesmen defeated visiting No. 4 Greensville County High School 9-4 on May 29.

Barmoy said his team was sluggish in this contest after 10 days of no games. Greensville took an early 3-0 lead.

“I thought Jackson (Harding) threw the ball well and kept us in the game, which is what he needed to do,” Barmoy said.

The Statesmen eventually answered back, offensively, mixing in bunts and timely hits with its strong play on defense.

Jones went 2-for-4 at the plate, Harding had a hit and two RBIs, as did Case, and senior Russell Schmidt also had a hit.

In five innings on the mound, Harding threw nine strikeouts and allowed only three hits and two earned runs.

Randolph-Henry finished the season with an overall record of 17- 5, reaching the regional semifinals for the third straight year.

“I think our coaching staff did a great job of putting guys in pressure situations early to really help us throughout the regular season,” Barmoy said. “We played some really tough opponents.”

He noted that except for the game against Maggie Walker, his team’s losses were each by only one run.

The Statesmen players grew, shedding selfishness as the season progressed in favor of a team approach, Barmoy said. They worked hard, practicing on Saturdays and playing over spring break.

Barmoy and his staff stressed direction, consistency and accountability with the team to help lead it to another winning year.

“We have good kids, we have a great coaching staff, and we work them hard, and those are the results,” Barmoy said.