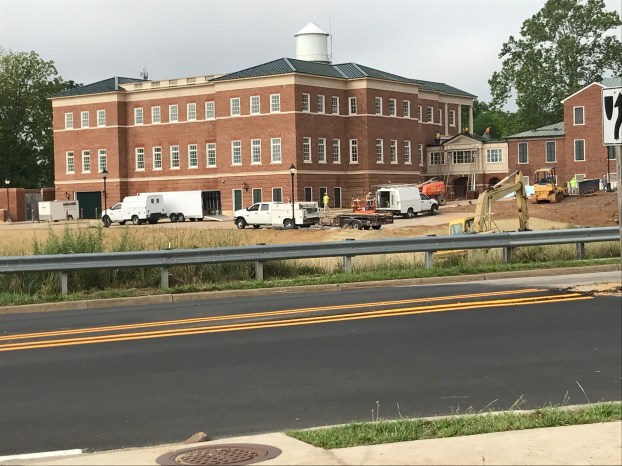 Progress on the new $13.9 million Charlotte County Courthouse continues to move forward throughout the month of May.

Progress on the new $13.9 million Charlotte County Courthouse continues to move forward throughout the month of May.

According to Skanska’s Project Manager Tim Burge, “things are going well (and) should be coming to a close real soon.”

As of May 8, Burge said the inside of the building has progressed to where it is almost complete and the carpet and flooring are down.

At that time he said some cleaning was done, however, there was still some painting to do.

He said he hopes for final commissioning of the project to occur toward the end of the month.

In addition, “the exterior is coming along well,” Burge said.

“Things are going pretty well up there as long as the weather continues to cooperate,” he said. However, May has already seen an abundance of inclement weather toward the end of the month.

The courthouse, originally, set for a December 2017 completion, has seen several delays due to weather concerns.

Aspen/Phenix Supervisor Donna Fore asked Burge during the testing if there was something built into the testing process to test the air quality in general to make sure?

“The duct work was all cleaned just previously before test and balancing by Stanley Steemer, so it was professionally cleaned” said Burge.“

He said during the test and balancing process, the system is balanced to make sure each grid is putting out correctly and to make sure the water flow to the units are correct.

“All of things is part of the test and balancing,” Burge said.

“So what you’re saying is because you cleaned the duct work you assume that the air quality is good or you have a test to actually measure the quality there?” asked Fore.

Burge said he did not know of a test that was required for that.