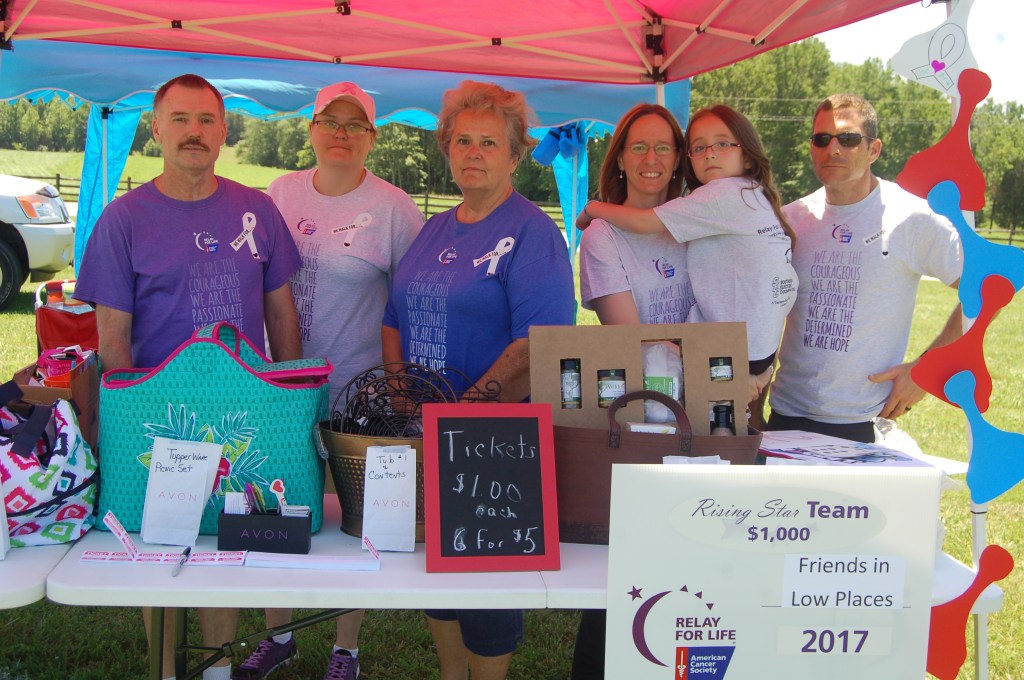 Photo by staff. The Friends in Low Places Team represents the “Game Over Cancer” theme at their table during the 2017 Relay for Life event. Pictured are, from left, Donnie Jackson, Jackie Watson, Hazel Smith, Jamie Garner, Jocelyn Garner and John Garner.

The 2018 Relay for Life, which raises funds for cancer research, has already made an excellent start after its Truckers Against Cancer Parade in October. However, more work needs to be done to meet its goal of $145,000, Senior Community Development Manager Kendall Brown said.

The relay will take place June 2, beginning at noon at the Southside Virginia Community College on 200 Daniel Road in Keysville.

“Our relay for life teams will be present with several on-site fundraisers, and then there will be activities throughout the day,” Brown said, noting games among the activities scheduled for the relay.

Brown said that the theme this year would be “Cruising for a Cure.”

“Volunteers are organizing a cruise-in, so that will be taking place part of the day,” Brown said.

The theme seems appropriate as another vehicle-themed event, Truckers Against Cancer Parade, raised more than $100,000 for cancer research. “The Truckers Parade Against Cancer raised a record-setting $112,000,” Brown said.

The Relay for Life of Charlotte County has raised approximately $128,734 so far.

The relay event will wind down with a Survivor Dinner at the campus. Brown said the dinner will celebrate cancer survivors and their families.

Brown encouraged community members to participate, noting that “If you’re someone who has been affected by cancer, which is all of us, and you’re interested in finding a cure, I would encourage you to come out and support, and also celebrate with us as well,” Brown said.