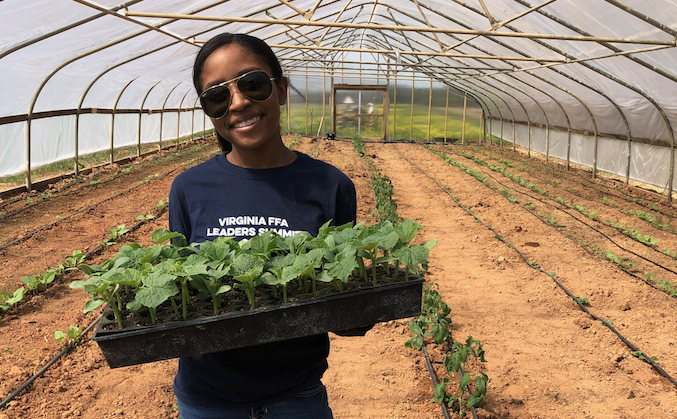 According to a press release, the purpose of Goldman’s program is “to provide CSA (Community Supported Agriculture) boxes to low income families in Charlotte County so that they can have access to fresh fruits and vegetables and not let finances impede their ability to do so.”

The United States Department of Agriculture said shareholders of a CSA farm typically pledge to cover anticipated costs of the farm operation and in return receive shares of the farm’s supply during the growing season.

However, Goldman is seeking to provide CSA boxes to five families free of charge in the county.

“It’s important for rural low income families to have access to fresh vegetables. Eating healthy has so many health benefits and a lot of families in the area have to resort to unhealthy foods because of access and money,” said Goldman.

The release said Goldman Farm has experience working with CSA’s based on their relationship with Homestead Creamery in Burnt Chimney. “They ship out over 80 CSA boxes per week to customers in the Roanoke Valley,” said the release.

The release also said many of Charlotte County’s residents are located in a food desert, which is defined by the USDA as qualifying as low-access community.

The criteria said “at least 500 people and/ or at least 33 percent of the census tracts population must reside more than 1 mile from a supermarket or large grocery store (for rural census tracts, the distance is more than 10 miles).”

The release said Hannah wanted the program to be reminiscence of her maternal grandmother who possessed a giving nature and was an educator in Louisiana Public Schools for 30 years.

“My grandmother had a passion for helping others, my mom and dad do the same for students in Charlotte County now, and I want to continue the tradition,” said Goldman. “I don’t have a job because of my workload at school, but I can help plant, grow and harvest the vegetables for families that can’t afford fresh vegetables in the community. It’s something I can continue during my summer breaks from college as well.”

In addition to being a Junior at Randolph-Henry, Goldman attends the Governor’s Schools of Southside Virginia and lives in Cullen. She is the daughter of Cornell and Melanie Goldman.

She said she hopes to expand the number of families in the program each year by finding additional funding and getting other local farmers involved.

Those interested must meet income requirements and fill out an application, in addition to giving a brief explanation of why their family would benefit from receiving the box in order to be considered.

Applications can be picked up at the Social Services Office or Charlotte County Health Department, both located in Charlotte Court House. Applications may also be received by calling (434) 660-2530.

The deadline for all applications is June 10 and chosen families will be contacted by phone by June 15.