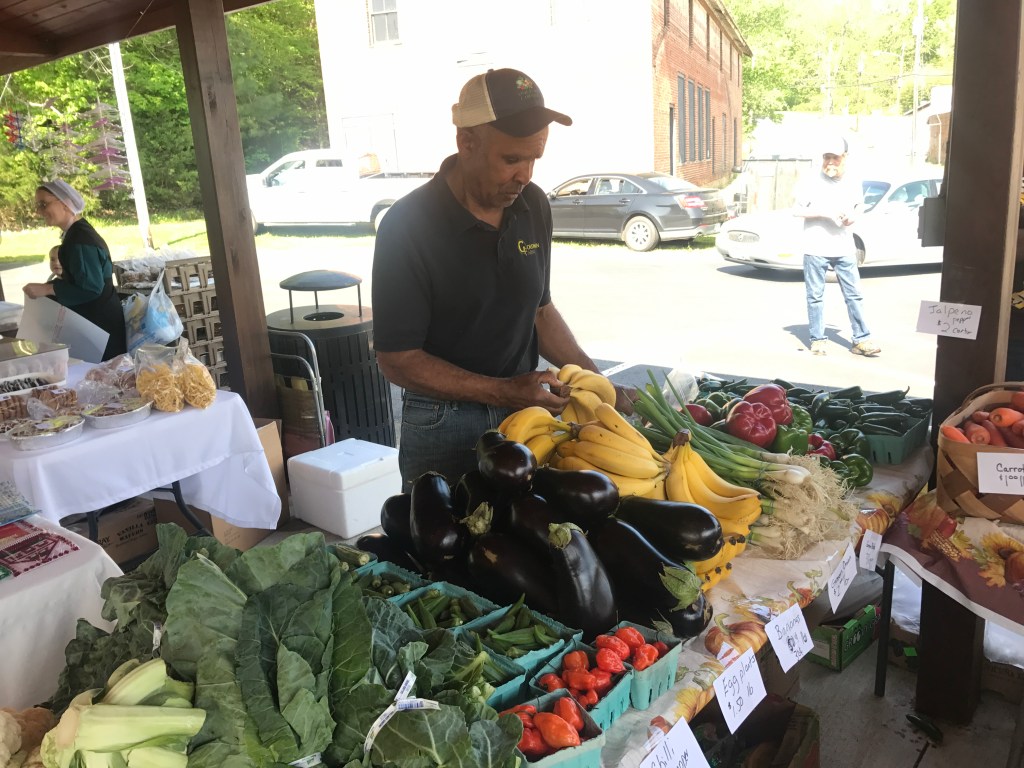 Brick Goldman of Goldman Farms organizes an assortment of fruits and vegetables to sell.

Jones said about 451 people came through on opening day and record levels of sales were reported.

He said it was a great feeling the entire day and “we’re still expecting a big day,” referencing the upcoming Friday market for this week.

Jones said even several individuals passing through the town from out of state saw the market and stopped to enjoy the festivities. Jones previously said an additional satellite location in Charlotte Court House next to the municipal building would run this year, which opened Tuesday evening.

“I think there’s a certain amount of clientele that we may be missing due to hours, some due to they may be leaving the court house area, headed to Keysville … ,” he said at that time. He said he hopes to catch some of that traffic with the additional market.

“We’ve been doing some thinking the last few years,” said Jones previously. “A lot of your farmers markets that are very, very successful, which we have been … they have an early week market and like a Friday or a Saturday market. So, working under the Charlotte County Farmers Market …

we were going to have a satellite location in Charlotte Court House on Tuesday afternoons … ,” he said.

The Charlotte Court House location will operate from 3-6 p.m.

Jones previously said the hours will be evaluated depending on the support of the satellite market.

Confirmed vendors will include Wildwood Farms and Berries and Archlynn Farms, featuring a variety of produce, cut flowers and bedding plants, he said.

“There’s a potential we may expand, depending on how successful we are over there,” said Jones.

The Charlotte County Farmers Market at Drakes Branch will continue to operate on Fridays and run through the last Friday in September.

Jones said good support was given for the additional two hours and he was appreciative of the support.

He said if the trend continues, hours for the rest of the month could be extended.