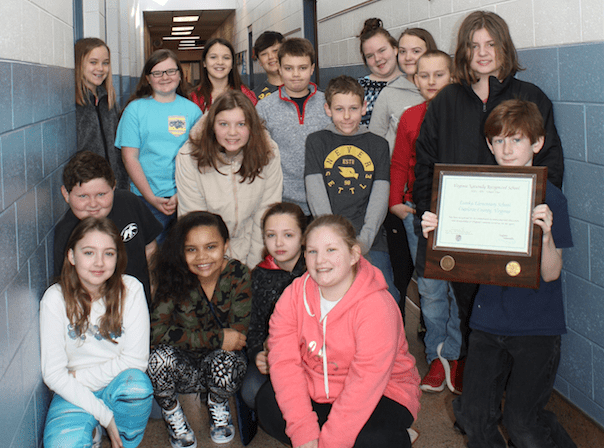 A group of approximately 50 people gathered behind Eureka Elementary School on April 29 to celebrate the 10th anniversary of the Eureka Ecology Club, which was started by Liz Peaden.

The club was actually born out of the celebration of another anniversary.

“We started by celebrating the 400th anniversary of Jamestown,” Peaden said. “That’s how it all started. Those fourth-graders helped me plant a tree, and then that fall, they became my ecology club, because I had applied for the Virginia Environmental Endowment grant.”

Peaden, a former county-wide speech teacher, shared what inspired her to create the club.

“I wanted to give children an alternative to school — not just playground activities,” she said. “I wanted to give them something going beyond that, something that was going back to nature and enjoying the woods.” The “backyard” of Eureka Elementary School provided an ideal venue for outdoor learning and fun.

“I saw a perfect resource — woods with a developed trail and exercise equipment — that was a positive way to engage children in the outdoors,” Peaden said. “This opportunity is not available at many schools, and I didn’t want to see it go to waste. There are so many connections with former school staff and community members who put their energy into creating something that was meant to last a lifetime. The Eureka Nature Trail is ready to be explored and enjoyed.”

The club has gained significant notoriety since its formation, twice being featured in Virginia Wildlife  magazine. It is also on the Virginia Department of Game and Inland Fisheries’ (VDGIF) school recognition list for Virginia Naturally Schools.

At the top of the list, VDGIF states, “The schools listed below have been recognized for their efforts in supporting environmental conservation and stewardship. … Schools must submit a plan for the following year and carry it through in addition to meeting additional criteria in order to be recognized in additional years.”

The Eureka Ecology Club’s 10th anniversary celebration included a brief ceremony, food and then those in attendance were encouraged to explore the Eureka Nature Trail.

“I just think the 10 years was important because people scatter so quickly — young people,” Peaden said. “They leave, so many of them do. They’re in college, they move to Richmond and Lynchburg. And I just felt like I needed to hurry up and have a little celebration. Three of my ecology clubs have already moved on. The fourth-year ecology club are seniors, so I knew I still have a lot of them still here.”

Evidence of Peaden’s special ability to communicate with children and awaken in them excitement about nature was found along the trail during the event. As they walked the trail, current and former club members and their parents gave testimony to how the club had been a benefit. Current members are typically in fifth grade and remain active members for a year. Conner Gee, a seventh-grader, was at the 10th anniversary event and said he learned “a lot of stuff” in the club, noting that his favorite thing about being part of it was the nature trail.

Traveling further down the trail, seventh- grader Kate Hamilton, another former club member, was there with her family, and she said what stuck with her from her time in the club was “learning about the different animals and trees …”

Pausing briefly from their tour through the woods were Scott and Leslie Poling, who noted that three of their children had been club members.

“They just learned to appreciate the environment more,” Scott Poling said. “They focus on, within our household, how important it is to recycle.”

He highlighted how well-developed and clean the trail was compared to when the club was in its infancy. Peaden has big plans for the club moving forward. “This coming year, I’m doing something completely novel,” she said. “We’ve had our 10 years being the Eureka Ecology Club. That just is inclusive to these children.

I’m going to open up to Bacon District kids next year.” “Some children are not in sports,” she continued. “I wanted to give children another avenue to explore. And it does require parents to bring them on Saturdays, and luckily, I think the parents realized that the children, this is what they want to do, so give them that opportunity.”