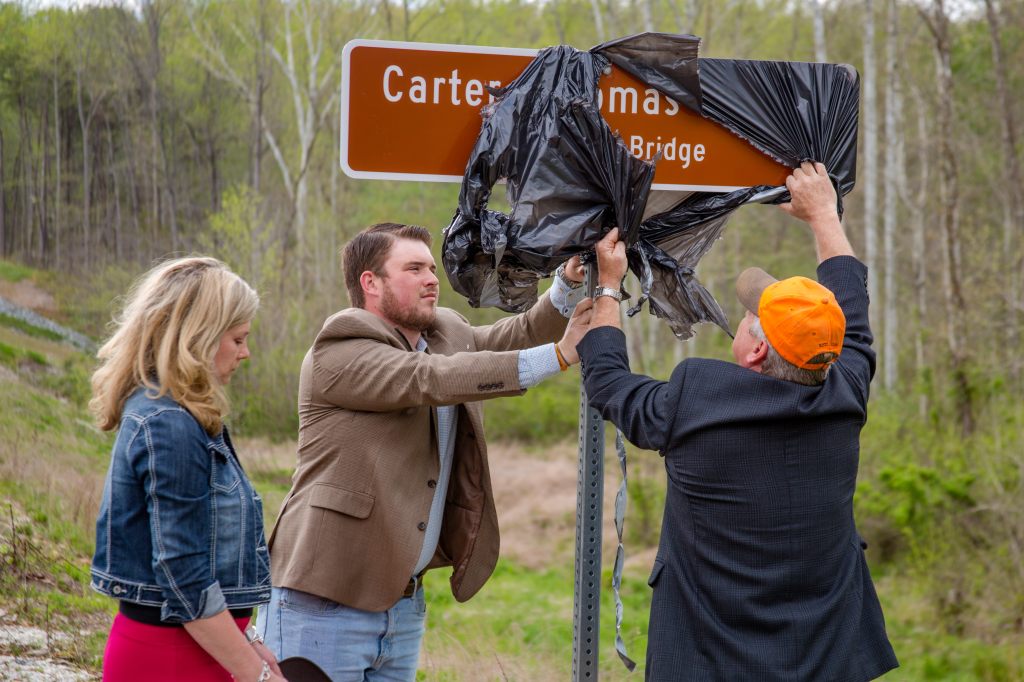 A dedication ceremony was recently held to rename the Louse Creek Bridge just west of Phenix to the Carter Thomas White Memorial Bridge.

“Today is a bittersweet day,” said former Phenix/Aspen Supervisor Haywood Hamlet. He said during his 27 years on the Charlotte County Board of Supervisors, he worked hard on the Louse Creek Bridge project. 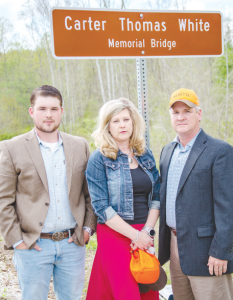 The family of the late Carter Thomas White unveiled the new signage at the bridge dedication
ceremony in memory of Carter. Pictured is, from left, Conner White, Regina Shortt White and
Will White.

Hamlet said after the bridge was completed, he requested to VDOT to rename the bridge.

“VDOT helped me get (this) accomplished,” said Hamlet.

The new signage for the bridge was unveiled at the ceremony in April.

During an official ribbon cutting ceremony for the Louse Creek Bridge in October, Hamlet first announced the bridge would be named in memory of White.

William White, Carter’s father, said the family was so honored and proud that the community would think enough of their son to name the bridge after him.

He also thanked the community for being there during their loss and Hamlet, along with the Board of Supervisors for working to repair the bridge.

Hamlet previously said he attended (VDOT) six year plan (meetings) for about 15 years before the project finally became a reality. Work was completed in July.

“In December 2016, Will and Regina (White) lost their son Carter in a tragic hunting accident. Carter was 16 years old and a junior at Randolph Henry High School. He was an outstanding young man in this community, everybody loved Carter and he loved everybody back. This community lost a fine young man. Today I want to say this new Bridge, on Route 40 crossing the Louse Creek, name will be the Carter Thomas White Memorial Bridge,” said Hamlet in October.

At that time, he said there would be some procedure to go through before the bridge can be named, including drawing up a resolution to be passed at the November Board of Supervisors meeting. It will then be presented to the Lynchburg District VDOT Board for approval and the signs will be made.

He previously said he received support from many citizens in the county who attended public hearings and supported his efforts to replace the bridge initially.