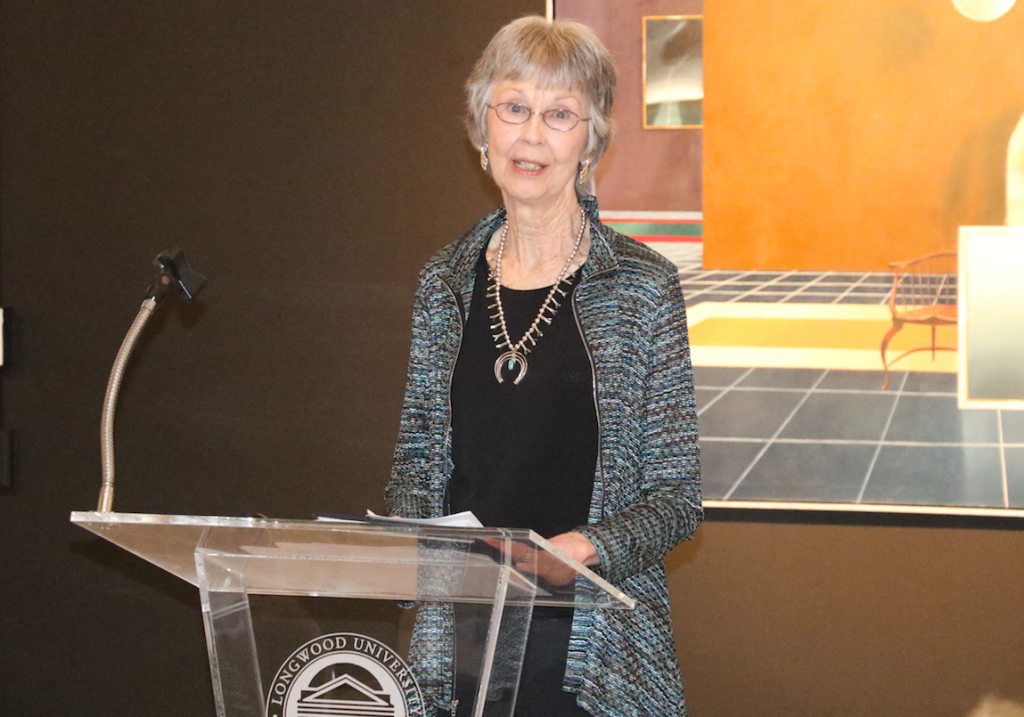 After receiving the Barbara Ann Dixon Lifetime Achievement Award, Joan Tipton addressed the large crowd at the LCVA’s 2018 Community Achievement in the Arts Awards on Friday in Farmville.

A larger crowd than anticipated gathered Friday evening in Farmville to see the Longwood Center for the Visual Arts (LCVA) recognize the enriching contributions to the arts of those in the Heart of Virginia and beyond, including Charlotte County’s Joan Tipton. It was all part of the LCVA’s 2018 Community Achievement in the Arts Awards.

“I think it went really well,” LCVA Executive Director Rachel Talent Ivers said of the event. “We had more than we projected. We had seating for 200, and we ended up with (people) filling up the stairs, which we’re excited to see that. Last year, we had close to I think it was 150, and then this year more.”

Joan Tipton was joined Friday by family members who came
to see her accept the Barbara Ann Dixon Lifetime Achievement
Award at the LCVA’s Community Achievement in the Arts
Awards. Pictured from left, are Tammy Tipton-Nay, Tipton and
James Nay.

She credited word-of-mouth for the growth of the awards ceremony, an event which she said began a little more than 20 years ago.

“There was a five-year hiatus, and this is the second year following the hiatus,” she said. “So, it’s been a little over 20 years.”

This edition of the community awards featured an expanded scope in terms of its winners.

“It incorporated people not only from Farmville but from outside of Farmville, so we really started acknowledging people in regions outside of what we consider our home base,” Ivers said.

This was evidenced in the recipient of the Barbara Ann Dixon Lifetime Achievement Award, Joan Tipton, who is from Charlotte County.

Presenting the award to Tipton was Juanita Giles, also of Charlotte County.

“I do want to say that it can be said of this year’s recipient that she has for more than 40 years put her heart and soul into bringing dance to southside Virginia,” Giles said, noting that Tipton studied and taught dance in Atlanta, Dallas, Los Angeles and New York. “In 1974, somehow, Joan Tipton ended up back in Keysville, Virginia.”

“In Keysville at that time, there was no dance school, there was no dance teacher,” Giles continued. “But then there was, because Ms. Tipton started teaching at the community college. But she outgrew that really quickly, and she founded the Southside School of Dance.”

As an LCVA press release notes, “Tipton is a former Radio City Music Hall Rockette, known for her years of teaching for Southside School of Dance. Over the course of 43 years, Tipton taught and influenced thousands of dancers from southside Virginia. One of those dancers, Merrianne Thompson Dixon moved on to become a teacher alongside Tipton. Dixon said she ‘couldn’t think of a more deserving person’ for the award.”

Giles noted that Tipton is characterized by exceeding humility and grace.

Tipton’s students “are unaware that they have been taught by not just one Rockette but two,” Giles said, “because Ms. Tipton’s daughter, Tammy, also became a Rockette for a summer job.”

In the LCVA release, Tammy Tipton-Nay, said her mother inspired her to follow my dreams.

“I am so grateful for her inspiration and to have worked with her at Southside School of Dance,” she said in the release.

After being presented the award by Giles, Joan Tipton said, “It is an honor and a privilege to receive this award. I have loved to dance all my life, and all I wanted to do is to share that same love and joy that I had with others.”

Several other awards were handed out leading up to the lifetime achievement honor.

Chuck Ross presented the Summer Garden Opera with the Organization Award. The opera was represented by Chris Swanson and Harlan Horton.

Rachel Ivers presented the Volunteer of the Year Award to Tory Wade.

Emily Grabiec presented the Student Volunteers of the Year awards to Lucia Butler and Grace Rust.

Just before the awards ceremony concluded, Ivers introduced Brent Roberts, dean of Longwood University’s Greenwood Library, so that some Longwood students could be recognized for their artistic works.

Ivers said, “Tonight’s honorees I think serve as an inspiration to all of us, and before we close, I would also like to recognize the contributions of several people who are embarking on their career as emerging artists. … One of the ways the LCVA fulfills its mission to foster creativity, intellectual curiosity and involvement in the visual arts is through our permanent collection, and we are thrilled to have the role of steward of collections we hold in the public trust. Each year, we select works from the senior exhibition …”

The LCVA release noted that an all-volunteer committee determined the award winners based on nominations from within the community. Noelle Prince Shear was the chair of the committee, while Tom Dennison, Pat Howe, Richard McClintock, Robin Sedgwick and Greg Tsigaridas served as general members.

“Nominees were evaluated based on the community impact of their contributions to the visual, performing or literary arts and participation in activities such as arts education and advocacy, youth/adult services, program development, arts festivals and events, volunteering and mentoring,” officials said in the release.