Firefighters from five departments respond to a fire at Jimmy’s Service Center, located at 301 Kings Highway in Keysville. The fire resulted in the total loss of the building.

A fire at a business in Keysville resulted in a total loss of the property, Keysville Volunteer Fire Department Chief Lynn Duffey said Friday. 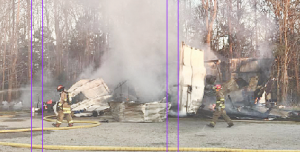 Pictured is the aftermath of a fire at Jimmy’s Service Center, located at 301 Kings Highway in Keysville. The fire resulted in the total loss of the building.

The business was Jimmy’s Service Center, a diesel mechanic shop that focused on heavy equipment and tractor trailers. The service center is located across from the Save U Time convenience store.

“It is a total loss,” Duffey said regarding the condition of the service center building.

“The firefighters have done a wonderful job containing this fire and doing what they needed to do,” Duffey said about the departments.

The cause of the fire is not yet known, Duffey said. He said Virginia State Police was called Thursday to investigate the incident.

“They were called to the scene to investigate,” Duffey said.

Lisa Childress Emerson, the sister and daughter of Jimmy’s Service Center owners Jimmy and J.P. Childress, said the shop was first established in 1970.

She said Jimmy led the business following J.P.’s retirement due to health reasons.

Emerson said she lives across the street from the service center and saw the smoke from her home.

“We are extremely thankful no one was hurt and very appreciative to the fire (departments) and first responders,” Emerson said.

Citizens could lose access to the Staunton River and the county’s only boat ramp via Clarkton Bridge Road, according to... read more