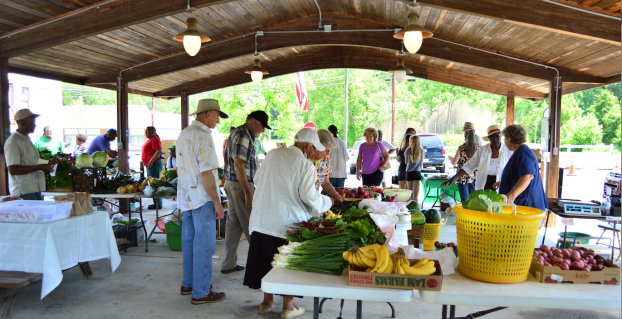 This 2016 photo taken at the Charlotte County Farmer’s Market shows area visitors looking at produce and other goods available at the market. The market has concluded its second year, Farmer’s Market Advisor Bob Jones said.

Jones said though the second year featured success, it ended on an anticlimactic note.

The last day was set to be Dec. 9, but Jones said they had to close the market due to Snowstorm Benji.

“We were scheduled to be open the Saturday of the snow,” Jones said. “That was a little bit of a disappointment … We had a pretty good day planned, we had a stew lined up to do and probably the most interest we were going to have all year to be there for the Christmas farmer’s market, but there was just no way to get the vendors there with the snow on the road, and there was no way to try to reschedule.”

He said the farmer’s market, located in Drakes Branch, continues to see regular customers and has matched the reception it had in 2016.

“This year pretty much mirrored the first year that we opened,” Jones said. “Local support is just unbelievable. It’s almost like a family atmosphere. You see the same people every market, they typically come in about the same time every Friday, and it’s kind of like seeing family and friends.”

He jokes about running into regulars at other places, such as the post office.

“I walked into the post office (Tuesday) to check and see if the grandbaby’s package arrived, and the lady there held the door open for me and told me, ‘Where are my vegetables? When are you all going to start again?’” Jones said, noting this happens “everywhere from the post office to the Dollar General.”

He said the market, selling baked goods, herbal products, produce and beef products, has helped some residents avoid a drive for groceries.

“When you’re in an area where it’s kind of a food desert, where a lot of the residents have got to drive 10 to 15 to 20 miles one way to get to fresh foods, (someplace) like a farmer’s market (can) be very beneficial to the community,” Jones said.

He said the market initially opened Saturdays, but they switched to and stuck with Fridays because the Saturday slot did not get the reception the organizers had hoped.

Jones said the market’s board of directors will meet during the winter to determine when the market will reopen in 2018.

“Most likely it will be the first of May again,” Jones said, “pretty much like last year. It really kind of depends on what kind of winter we have, or what kind of early growing season that we can get. Typically, looking at the last two years as far as the farmer’s market, it really picks up after school and starts to slow down after Labor Day or after school starts back up. I think there’s really a direct correlation between what crops are actually coming in locally, from a produce standpoint, and what the customers really want, so we don’t want to get too early because we want to be able to offer a variety of enough local stuff as we can.”

To deliver feedback about the market or to contact the market’s board of directors, Jones said the best way to contact them would be at the market’s Facebook page, named Charlotte County Farmer’s Market at Drakes Branch, or to call Jones at the county extension office at (434) 542-5884.