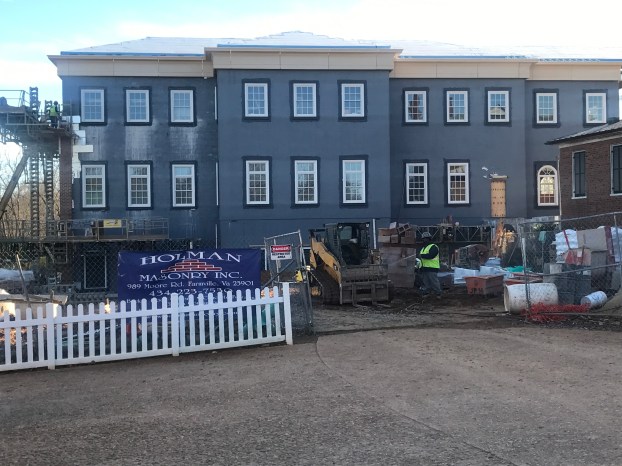 The new Charlotte County Courthouse continues to progress with a projected completion date set for the end of January 2018. The building could be ready for occupancy by February.

The new Charlotte County Courthouse continues to progress with a projected completion date set for the end of January 2018.

“Of course the architect and Skanska will walk the building with the contractor to confirm when that happens, but right now we’re shooting for the end of January,” said Skanska USA Building, Inc. Representative Curtis Elswick at a December meeting of the Charlotte County Board of Supervisors.

He said furniture for the new building is set to be delivered in February, as soon as the contractor is finished.

Additionally, furnishing the building could be a 1-2 week process. He said the goal is to have all furniture in the building by the end of February, and it would be ready to be occupied.

According to information in a previous March 2017 report from Skanska USA Building, Inc. Project Superintendent Tim Burge, the courthouse was originally projected to be completed Dec. 28.

A November 2017 report said, “Blair’s schedule reflects substantial completion by end of January due to lead time for brick arches. The construction schedule still needs to be finalized.”

Elswick said, “It’s hard to miss when you drive by, but as you can see … brick is being installed on the courthouse along with the precast concrete on the outside of the building. On the inside, mechanical, electrical plumbing work continues, with wiring being pulled and duct work being installed.”

He said the stairs have been installed inside the building and elevators are currently being installed.

“If you go to the lower level of the building, you’ll see the painting has started on the lower levels, drywall is being hung and finished …,” said Elswick.

Additionally, he said ceramic tile on the ground floor is being installed.

“A lot of activity is happening in the courthouse,” Elswick said.

He said last week the county issued an RFP for a VOIP phone system, which would be used to connect all buildings — including the courthouse — on the campus into the same system.

Supervisor Nancy Carwile said that work on the connector that would connect the existing clerk’s office to the new courthouse was being held because “what Tim (Burge) told me was, they were delaying that because once they breach the wall to the clerk’s office, they would like for the courthouse to be as near completion as possible …”

Information from Skanska indicates this is for security reasons.

According to Elswick, the budget still remains unchanged at $13.9 million.

According to its website, Blair Construction has completed courthouse projects in Lunenburg, Halifax, Nelson and Bedford counties.

Water tower to be repaired

The Town of Keysville announced Dec. 5 that the large water tank at the Charlotte County Industrial Park will be... read more