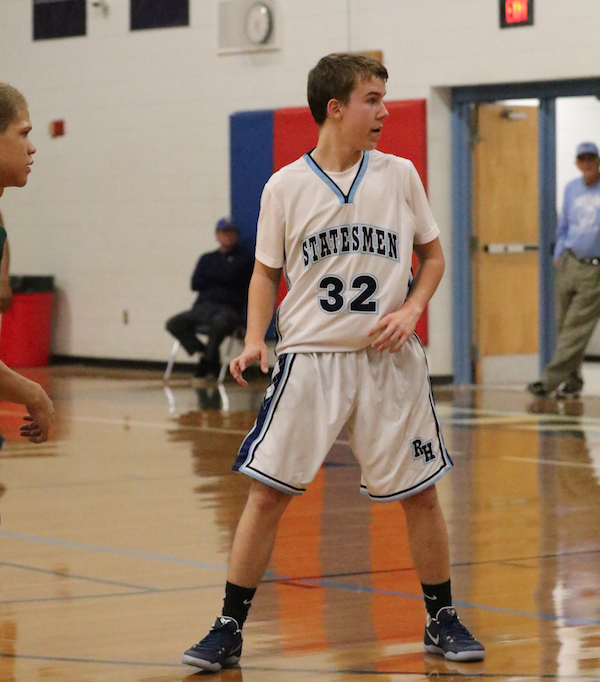 Randolph-Henry shooting guard Matthew Harding is back on the JV boys team as a sophomore this year, serving as a leader on the team.

Statesmen learn on the job

The Randolph-Henry High School junior varsity (JV) boys basketball team has opened up its 2017-18 season with a 1-2 record, proving highly competitive in every outing despite lacking significant experience on its roster.

“Obviously, 1-2 isn’t where we want to be,” Statesmen Head Coach Mark Heintzleman said. “We’re a JV team, so I can’t say we’re young because every JV team is young, but we are very inexperienced in that four of my five starters, at least to this point, are non-returners — so either freshmen or sophomores that didn’t play last year.”

The coach said his squad is still learning how to play team basketball.

“We’re still learning how to play five-on-five basketball and not just one-on-one basketball,” he said.

However, he noted seeing an abundance of potential on his roster that features three sophomores, seven freshmen and one eighth-grader.

“I think this is a very talented group,” Heintzleman said. “I’ve got a lot of size, which is something I haven’t had in the past or at least last year. I had a very small team last year, so I feel a little bit spoiled this year.”

He pointed out that his team this year has outrebounded each of its first three opponents, demonstrating a key ingredient to the recipe of winning.

“But … we’ve got to slow our games down and do what we can do, do what we know how to do in regard to playing defense and not giving the team the ball,” Heintzleman said. “Once we can do that, I think we can do some big things in the district this year, for sure. I think we should be one of the better teams in the district, just from what I see.”

The 2017-18 Statesmen feature only two returners from last season. One of them is sophomore shooting guard Matthew Harding.

“He’s one of my best defenders,” the coach said. “… He’s got the most experience at the JV level.”

R-H visited Prince Edward on Tuesday and hosts Amelia on Friday at 5:30 p.m.