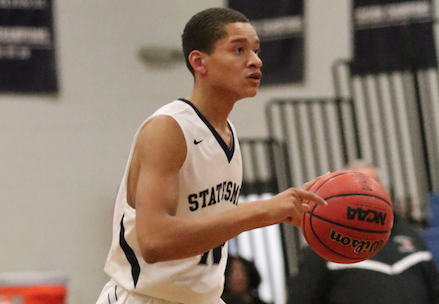 High School’s boys basketball team will look quiet familiar this year, and it is poised for a winning season after going 9-11 during the 2016-17 campaign.

“I think on paper we’re really good, but we’re going to have to play the games, so we’ll just see,” Statesmen Head Coach James Graves said. “I think some teams in the district lost key people. We lost a couple people. We have the vast majority of the team back.”

Eight of the 11 players on the roster are returning team members.

This year, the Statesmen feature six seniors and five juniors.

“We have a lot of versatility in what we can do,” Graves said. “We’ve got some big guys, and we can go with a smaller lineup and a faster lineup.”

“They have been starters since they were 10th-graders, and you can’t coach experience,” Graves said. “… Three years ago, we began the building process, and we’re going to see whether it comes to fruition. We’ll see how these guys respond.”

The Statesmen open the 2017-18 season on Wednesday at 7 p.m. when they visit Amherst County High School, a Class 4 team.