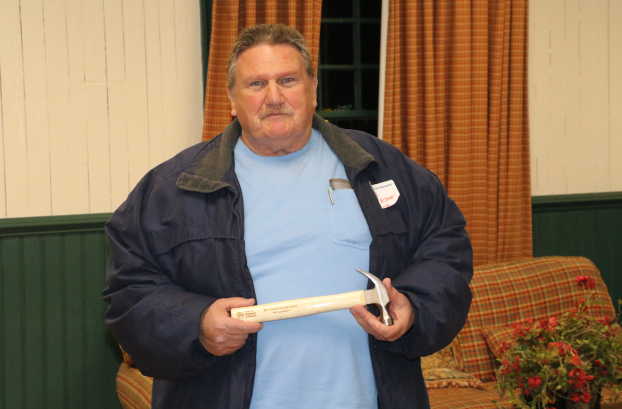 Phil Jackson, of Charlotte County, holds the Golden Hammer Charlotte County Partnership award that he received Sunday evening in Farmville. The accolade recognized the work he did with Farmville Area Habitat for Humanity to help rehabilitate a home in Charlotte Court House.

Farmville Area Habitat for Humanity (FAHFH) celebrated past and present success stories as well as future aspirations during its 2017 Golden Hammer Awards on Sunday at the Historic Farmville Train Station.

A crowd of donors, volunteers, advocates, board members, committee members and concerned citizens were in attendance as FAHFH issued accolades to those who made the homeownership process possible for more families in 2017.

“I thought it went really well — great turnout and just a lot of excitement and encouragement,” said FAHFH Community Outreach Director Sam Rabon. “I always love hearing the partner families telling their stories. That’s always a highlight of the evening.”

One of those partner families was headed by Jermaine Boyd and Angel Wilmouth, Charlotte Court House residents.

“Charlotte County was our most recent county that we started doing service in, and our main program out there has been our Brush With Kindness repair program,” Rabon explained to the crowd. “But we had the opportunity this past year to gain possession of a home that had been sitting vacant for a few years in Charlotte Court House. And we did what we call a rehab, a rehabilitation on that property. And in the meantime, we were trying to find a partner family that could come into this home and become a homeowner, because as we know, all Habitat homeowners pay an affordable mortgage and become homeowners just like every other homeowner.”

During the homeowner panel, Boyd gave great insight into what that process looks like and what it meant to him and his family.

He shared that where his family used to live, the heat was unreliable, and he would have to wake his family up in the middle of the night to gather his children and help keep them warm.

“There was plenty of nights that I did that,” he said. “When I go to sleep, heat’s on, but when I wake up, I’m freezing.”

That, along with many other things, is no longer an issue at the rehabbed Habitat house.

“It was a process still, but Habitat made it happen,” Boyd said. Describing his skepticism at first, he added, “And I’m walking up in this house, like, ‘Yeah, right. Show me what y’all going to do in this house,’ and it made me a believer. I feel love for Habitat, and like I said, it’s where I want to be.”

A variety of people in the community helped rehabilitate the property.

“You meet volunteers, people that you work with are awesome,” Boyd said. “I think we had a group of Marines come down, and they did the floor. And these guys were remarkable. Just coming through, I had some college kids, everybody comes out, and it just makes the family bigger. … The community we’re in, I can’t speak for all communities, but they’ve been a blessing.”

Boyd said Jackson did awesome work “every day on the house. (He was) a great guy to be working with.”

Sharing to the crowd what the process had taught him, Boyd said, “You give, and you will receive.”

Rabon said the Boyd-Wilmouth family is Farmville Area Habitat for Humanity’s most recent partner family to be in its home and have it dedicated.

He noted the organization now has five new partner families it will be working with in the new year — two in Prince Edward County, two in Buckingham County and one in Cumberland County.

There were a variety of 2017 Golden Hammer recipients Sunday evening.

Those receiving the Golden Hammer Volunteer award included Brenda Taylor and Tina Sickmiller, for their work at the ReStore, Donna Bennett, for her administration work, Nehemiah Braxton, for his construction work, and both Alpha Phi Omega Fraternity Inc. and Longwood University’s women’s basketball team, for their all-around volunteer work.

Special Recognition awards were handed out to Yashua Berry, Ronnie and Carol Baber and Ralph Dunnavant.

The Central Middle School gymnasium was packed with students and families Friday afternoon to honor veterans of Charlotte County, who... read more