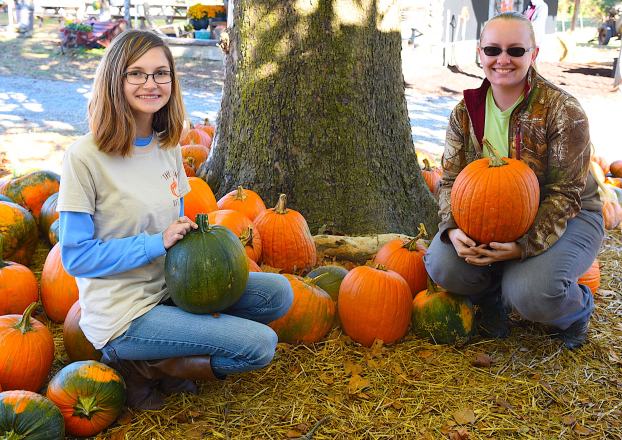 Pictured are, from left, Casey Early of Keysville and Caitlin Lee of Kenbridge.

Currently, two students of the Southside Virginia Community College (SVCC) Agribusiness program have the job of working there as interns. Students gain hands-on experience to complement classroom training and determine if the responsibilities of the internship position match future full-time employment interests. The internship can also provide insights into many different facets of the business.

Casey Early of Keysville interns at Parrish Pumpkin Patch. She has plans to continue her SVCC studies by transferring to Virginia Tech. Caitlin Lee of Kenbridge is also interning at the pumpkin farm and plans to continue studies online for her four-year degree. There have been two other interns, Taylour Edmonds and Kelli Haizlip from SVCC.

Edmonds said of her experience, “It was a job: I got paid, I worked, I hustled, I complained on occasion, I sweated, I organized and so on. I did not, however, ever have a day at Parrish Pumpkin Patch that I did not look forward to.”

This innovative farm provides a great ‘lab’ for classes at the college. Recently, a class from the college spent a day at the farm observing the events as three school bus loads of children descended.

Parrish Pumpkin Patch is a family affair and the idea was hatched by Liz and Jeff Parrish about nine years ago. With help from their three children and their parents, the venture has grown and morphed into a portion of the farm’s annual income. They grow pumpkins from seeds in flats, transfer to the ground and tend to them until harvest.

Besides getting a pumpkin at the patch, entertainment includes an Imax theater experience in a repurposed 75-foot silo, a hayride, trip through a corn maze, farm animals and corn bins to jump in. There are also places to take photos and picnic. The pumpkin patch operates seven days a week during the month of October.

Jeff Parrish noted that the farm combines the old with the new.  He said they still farm soybeans, corn and pumpkins in a place where a dairy farm stood for forty years.

The farm has been featured on the “Virginia Is For Lovers” website as a fall event.

Their website, parrishpumpkinpatch.com, tells the whole story. According to the website, “the family’s favorite part of the May-November process is the people along the journey including their supporters, staff, returning faithfuls and all the newcomers, young and old.  But especially, the gratification felt by being able to run the business at their farm, where at the end of each draining day, they can take a short walk to the back door of their humble abode, and crash.”

Eli Parrish, son and integral part of the operation, studied Agribusiness at SVCC and now attends Virginia Tech to complete a four-year degree.

Governor to speak at program graduation

Virginia Governor Terry McAuliffe will be the guest speaker at the graduation of the Southside Virginia Community College Power Line... read more