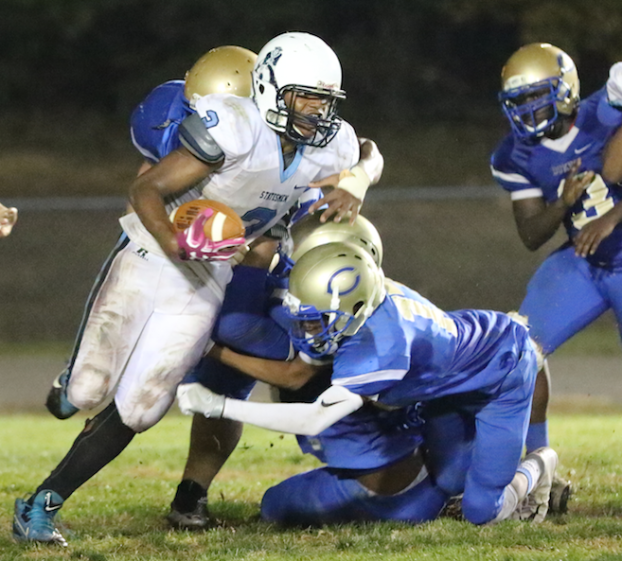 Randolph-Henry High School’s varsity football team had been following new Head Coach Zach Orlando’s lead in the effort to bring about a winning culture, but the Statesmen had not been able to put everything together to achieve victory… until Friday.

In their final game of the 2017 season, the Statesmen earned a 28-14 win over host Cumberland County High School.

“I think it was big for us as a program, heading hopefully in the right direction,” Orlando said. “I think that win kind of translates into the offseason, translates into all the stuff you do once the season’s over — the weightlifting, the seven-on-sevens, the camps and all that kind of stuff. It’s going to make it easier to get our guys out there and motivated to do that kind of stuff. And at the same time, I think it’s a good way to send the seniors out and let them know that, ‘Hey, look, you might not be around next year, but you’re the group that really set us up to be able to do all these things and get where we’re trying to go.’”

Friday’s game was tied 6-6 at halftime and 14-14 after the third quarter, but then Randolph-Henry pulled away in the fourth quarter. Junior halfback Treymon Roberts scored the go-ahead touchdown on a short run, and senior halfback Derius Marable followed up the score with the two-point conversion.

Roberts finished the game with 32 carries for 194 yards and two touchdowns.

“Treymon was definitely a breakout performer,” Orlando said Tuesday. “I actually sat down and watched the game today, and he made some runs at a lot of points where there wasn’t a whole lot there, and he was just patient with it and kind of picked his way down the field.”

The coach also praised Marable, who gained 80 yards and a touchdown on 11 carries.

“Cedric Patrick’s another guy that came in and stepped up and played some tailback for us,” Orlando said, as Patrick, a senior, gained 30 yards on seven carries.

Freshman quarterback Peter Jones went 3-for-7 passing for one touchdown and one inception. Senior wide receiver Hurley Noblin had a short touchdown catch.

“Defensively, I thought we played our best game of the year,” Orlando said. “(We) really only gave up one score. The other one was a fumble recovery that they scored on.”

He highlighted senior defensive back Aaron Crawley for grabbing a late interception that helped seal the win.