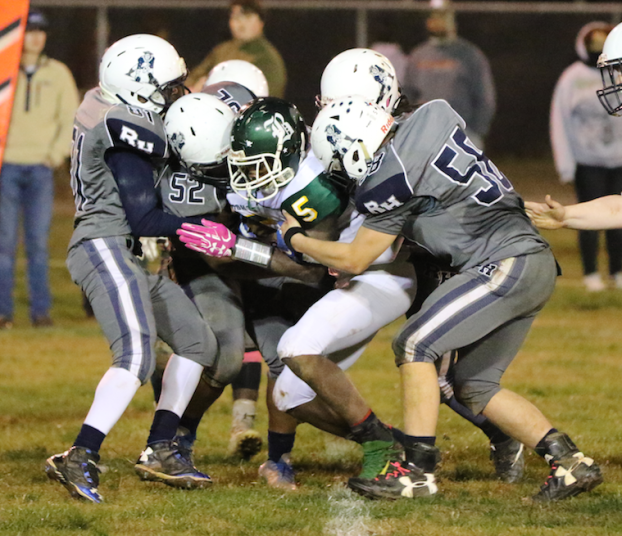 Converging on a Buckingham County High School ball carrier is a group of Randolph-Henry High School defenders that includes but is not limited to, from left, senior Roderick Currin, No. 81, senior Ryan Skipper, No. 52, and sophomore Danny Parrish, No. 58.

Randolph-Henry High School’s (R-H) varsity football team experienced its ninth loss of the season Monday evening, 53-6 to visiting Buckingham County High School, but the Statesmen left their fans and coaches with a genuine reason to cheer.

“Like I just told the kids, we’re a resilient group of guys, which is really good to see, and we’re proud of them, week in and week out,” Randolph-Henry Head Coach Zach Orlando said on behalf of his staff.

He pointed to the battle up front as being the factor on which Monday’s game turned in favor of the Knights.

“Buckingham’s always for a long time been big on the line of scrimmages, and we’re very young up front,” Orlando said. “We don’t have a single senior on the front line.”

The Statesmen got on the scoreboard with six minutes, 12 seconds remaining in the game when freshman quarterback Peter Jones connected with senior wide receiver Hurley Noblin for a 13-yard touchdown pass.

Orlando praised Noblin’s consistency and added that Jones “has gotten better every week. That ball Peter threw in the back of the end zone, he would not have made that pass early on.”

On Monday, Noblin had four catches for 67 yards and a score, while Jones went 6-for-13 passing for 76 yards, one touchdown and one interception.

Orlando described his squad and the Dukes as “two very, very similar teams, both kind of trying to find their way. We’re both 0-9. They’re in a position where they’re transitioning. This is that coach’s second year, and they’ve made some progress.”