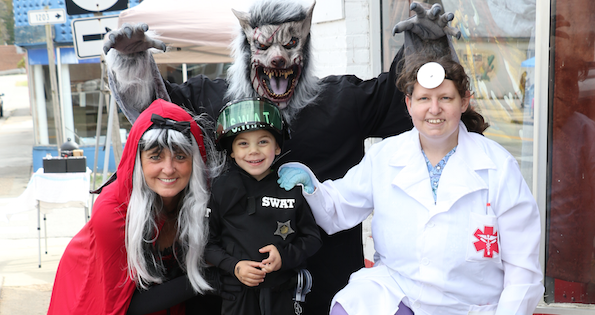 Posing for the camera Saturday are, from left, front row, Celina Robinson, Joe Robinson and Cassy Simpson with Stu Robinson costumed behind them.

The second annual Drakes Branch Halloween Festival drew a solid crowd to the town Saturday, with some getting in the spirit of the holiday by attending in costume.

Town Council Member Deborah Kennedy estimated that a couple of hundred people attended the event, which included activities for all ages.

“We had some vendors that did not show,” Kennedy said. “I guess they thought the weather was going to be bad,” but she noted that considering what was on hand, the festival turned out well.

“This was all in conjunction with the Farmer’s Market,” Kennedy said of the festival, noting the town and the market try to do combined events to help draw people to the town.

She noted the overall benefit of the festival is to “bring people together, let people know we’re here.”

Kennedy expressed hope for the event to grow each year. The timing of it could prove to be a key factor to that end.

“Normally we would have a parade in the beginning, and the Randolph-Henry (High School) band would lead the parade,” she said. “But after we changed the date to October instead of September, we found out that they compete on every weekend in October.”

Last year, she said, was when the festival was moved to October.

“Before that we hadn’t done it for a couple years, and then it had always been in September,” she added.

With the availability of the Randolph-Henry band in mind and potential to bring back the parade, Kennedy said, “We’ll have to decide whether we’re going to keep it in October or if we’re going to go back to September.”

At the farmer’s market, Curtis Morton of Goldman Farm was on hand selling locally-grown vegetables and said that business had been average.

Mike Godwin and the Off-Duty Band played music in the afternoon inside the Drakes Branch Volunteer Fire Department.

No one lived in the two-story house on 9041 Church St. when the Keysville Volunteer Fire Department purchased the home... read more