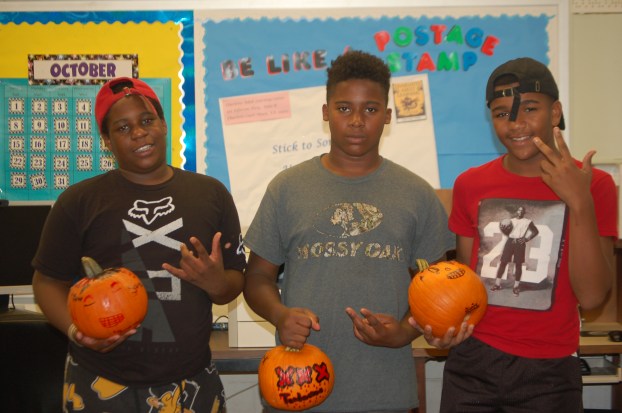 The Charlotte Adult Learning Center held a fall festival Oct. 14 that offered activities for adults and children and sought to bring awareness to the services at the center.

Kids and teenagers decorated pumpkins, made pirate hats and manned the seven seas through a series of games and activities headed by STEPS Head Start Instructor Avante Hawkes.

The activities were based from the book “Edward and the Pirates” by David McPhail.

Representatives from the Charlotte Lions Club offered vision testing for children and adults.

Outside of the center, live music from Jeremy Elder and the duo Code Blue sang folk pieces during the festival.

“We are always trying to strive to recruit more students, volunteers willing to instruct,” Calhoun said.

He noted the challenges of other festivals taking place on the same day as the center’s festival, but was glad for the turnout.

“You have to raise awareness one person at a time,” Calhoun said, who had been director of Multicultural Affairs and International Student Services at Longwood University. “The fact that people were here, that our partners were here, means it’s a success.”

Area authors Steven Faulkner and Rita Odom Moseley spoke during the event, describing how literacy and the ability to tell their stories shaped their lives and experiences.

Faulkner said he had worked as a carpenter and truck driver before being encouraged to pursue creative writing after winning a writing contest at a university.

He worked night shifts delivering newspapers while he went to school, and eventually had several historical nonfiction books published, one that was adapted into a film called “WaterWalk,” detailing a 1,000 mile canoeing expedition across the midwest, following a path previously traveled by New French (Now Canadian) explorers Jacques Marquette and Louis Joliet.

He said telling stories changed his life, and encouraged others to share their stories.

“Everybody here has stories to write,” Faulkner, a creative writing professor at Longwood, said. “Everyone’s life is important.”

Moseley spoke about her being directly impacted by the closing of public schools in Prince Edward County in retaliation to desegregation. This experience inspired her to write the recently published “No School.”

She said she recently received a letter from an 11-year-old student in Pennsylvania who said he enjoyed reading and was impacted by the book, which explores the importance of education, childhood bullying and resilience.

“I was directly affected by the closing of schools,” Moseley said.

“The story (is told) by a 12-year-old girl through her eyes,” Moseley said.

To learn more about the center, call (434) 542-5782 or visit the Charlotte Adult Learning Center on Facebook.

No one lived in the two-story house on 9041 Church St. when the Keysville Volunteer Fire Department purchased the home... read more