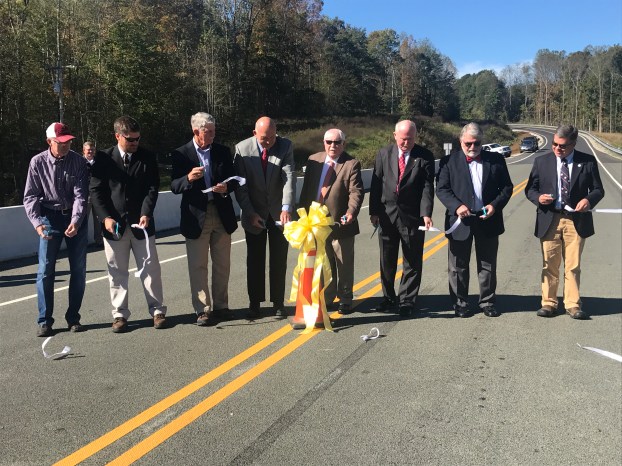 During a ribbon cutting ceremony for the Louse Creek Bridge, located just west of Phenix, Aspen/Phenix Supervisor Haywood Hamlet announced the bridge would be named in memory of the late Carter Thomas White.

Hamlet previously said he attended the six year plan for about 15 years before the project finally became a reality. Work was completed in July.

“In December 2016, Will and Regina (White) lost their son Carter in a tragic hunting accident. Carter was 16 years old and a junior at Randolph Henry High School.  He was an outstanding young man in this community, everybody loved Carter and he loved everybody back. This community lost a fine young man.  Today I want to say this new Bridge, on Route 40 crossing the Louse Creek, name will be the ‘Carter Thomas White’ Memorial Bridge,” said Hamlet.

He said there will be some procedure to go through before the bridge can be named, including drawing up a resolution to be passed at the November Board of Supervisors meeting. It will then be presented to the Lynchburg District VDOT Board for approval.

He said he received supported from many citizens in the county who attended public hearings and supported his efforts to replace the bridge.

“There are so many people to thank,” said Hamlet. He said the landowners played a huge role in the process.

“I met with VDOT people in the Lynchburg office and gave them the names of the landowners and they took it from there to acquire the land necessary to build a bridge.”

“This was an older, narrow structure and it was replaced with a bridge built to today’s standards,” she said.

Jones said the new bridge structure is wider and includes higher rails than the old bridge.

Hamlet said a lot of credit belongs to Shannon Valentine. Valentine serves as the Lynchburg District representative on the Virginia Commonwealth Transportation Board.

According to the website, the agency performs checks on each of its bridges at least once every two years.

At a recent meeting of the Charlotte County School Board, the board voted to secure a committee of two school... read more