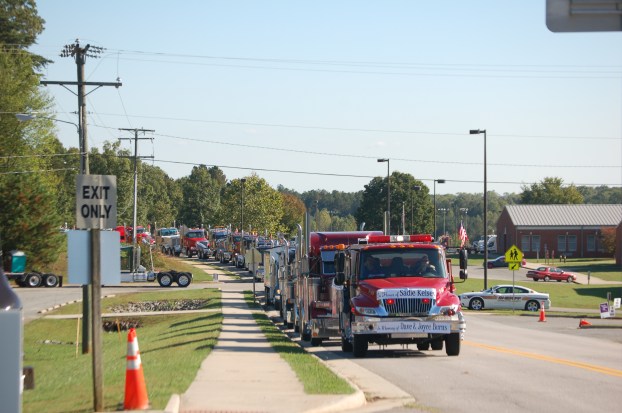 It was nearly 25 minutes before each of the 226 trucks, tractors and emergency service vehicles left the parking lots at Randolph-Henry High School Saturday afternoon.

Lines of trucks farther than the eye could see filled the area with honks, being met with cheers and waving of flags from participants lining each side of the roads. A helicopter overhead followed the vehicles.

The show of overwhelming support was evident during the 17th annual Truckers Parade Against Cancer (TPAC), which drew thousands of participants across the Heart of Virginia, many of whom have been affected by or survived cancer themselves, and raises hundreds of thousands of dollars for cancer research.

The trucks traveled 35 miles, driving along Route 40 before turning onto Route 47 to reach Drakes Branch. Taking a left on Highway 59 to reach Keysville, trucks rode along Highway 40 before reaching their destination at Southside Virginia Community College in Keysville.

Each truck or vehicle hung a banner across the front bumper, many containing the name or names of people who passed away from cancer.

Organizer Shelia Dodd Jones said each of the 277 banners were purchased by participating truck companies for $250. This comes up to more than $62,000. This does not count the live and silent auctions held by the organizers. Jones said there had been a cake purchased by a buyer during the auction that came to about $3,200.

She said there had also been new sponsors that participated this year.

“Several different companies … expressed to me that they have enjoyed the day,” Jones said.

Jones and her husband Darrin, came up with the idea for the Truck Parade after participating in several fundraising activities with the Charlotte County Chapter of Relay for Life and feeling there could be a new way to engage the community for donations and support.

Jones, who lost her mother, Carroll Hamlett Dodd to cancer in 1997, noted the truckers’ dedication each year.

She said the warm and sunny weather of Saturday’s parade was a contrast to last year’s event, where trucks braved through several inches of rain from Hurricane Matthew.

“We were lucky to have this beautiful, sunshiny day,” Jones said.

In addition to the auctions, participants could also donate directly to the Truckers Parade Against Cancer team and purchase containers of stew.

Organizers treated participating truckers and their families by serving lunch to them at Central Middle School earlier in the day.

Charlotte County Relay for Life Organizer Bonnie Gilliam said this event has raised more than $125,000 in the previous two years, a startling number for the county.

More startlingly, and more excitingly, Gilliam and Community Development Manager Kendall Brown with the Southeast Region of the American Cancer Society, Inc. said the chapter has become the highest earning chapter per capita in the United States. Gilliam said the truck parade plays a major role in raising those funds.

“It’s the most awesome thing in the world,” Gilliam said about the overwhelming support drivers and families in the area have offered. “When you see 200 trucks on the road, it’s a big thing.”

This was Driver Donald Barker’s first year participating in the parade. Driving a farming pick-up truck, he attached a banner in memory of his mother, Charlotte Barker, who passed away from cancer in December.

“It’s real nice,” Barker said about the parade so far.

“It was fabulous,” Poppe said about the parade. “I don’t think we can do enough to support cancer research.”

Don Burroughs, who watched the parade outside of his home near the high school, said he has seen the event grow each year and is grateful for its increasing impact.

“It’s just good to see the word getting out,” Burroughs said. “Hopefully one of these days it can wipe cancer out.”

A night at the carnival

People packed the hallways of Bacon District Elementary School and enjoyed the bounce house and inflatable obstacle course on the... read more