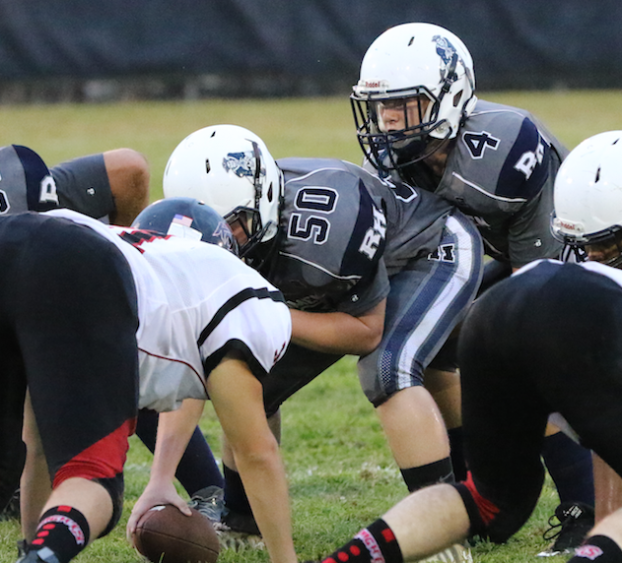 Randolph-Henry High School freshman quarterback Peter Jones, pictured running the offense in an earlier game this season, was one of the few bright spots for the Statesmen on Friday as they fell 41-6 to host Amelia County High School.

Struggles on offense and at the line of scrimmage contributed to the Randolph-Henry High School varsity football team’s 41-6 loss to host Amelia County High School on Friday night.

“I thought for probably about the first quarter, we really played pretty well on defense, and even the first half overall, we played pretty good on defense,”  Statesmen Head Coach Zach Orlando said. “We didn’t really do anything offensively to help our defense out as far as keeping them off the field or taking opportunities that they gave us.”

The Raiders held a narrow 7-0 lead in the first quarter but built it up to 28-6 by halftime. They scored their other 13 points in the third quarter.

“Overall, I was pretty disappointed in the play up front on both sides of the ball for us,” Orlando said. “Both the offensive and defensive line — I really thought Amelia outclassed us at both of those spots. As far as (the) secondary goes, we had some guys that we cut loose, but we covered much better than we have in the past two or three weeks.”

The coach said the only offensive weapon Randolph-Henry had Friday was senior wide receiver Hurley Noblin.

Jones, a freshman, was 8-for-19 passing for 91 yards and an interception. He completed passes to five different receivers.

“Tyrie (Blow-Tydings) didn’t have his best game, and the offensive line really didn’t have their best game, which, in turn, hurt Tyrie,” Orlando said. “Treymon never got any traction running the ball.”

Blow-Tydings, the senior fullback averaging 187 rushing yards a game, ran for 117 yards and a touchdown on 22 carries Friday night.

The Statesmen are still looking for their first win this season, but their showdown with Amelia did not endanger their future efforts health-wise, as they did not sustain any major injuries.

Orlando said the Chargers will be “the first team that really runs the football at us … (On Friday) we did a really good job against the run, and we’ve done a pretty solid job all year against the run. We just haven’t been able to eliminate the big pass play.”

Avoiding naming a specific Central offensive player to focus on defensively, Orlando said, “You’ve kind of got to stop the system rather than stop the guy.”