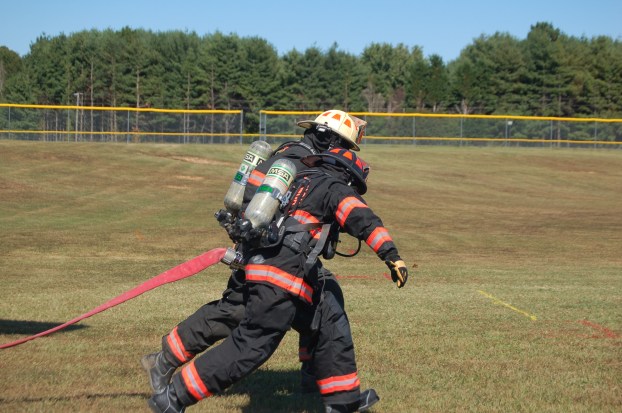 It was also the first year the department competed.

The annual competition includes a parade that went through the Town of Keysville. Participants also got to view rows of firetrucks from each of the 19 fire departments that fall under the SVVFA.

Members of the Drakes Branch team, seated on folding chairs under a canopy at the corner of a field at Southside Virginia Community College (SVCC), said they were both nervous and excited to take part in the various courses.

Fire Chief Kenny Tharpe said he and others were most excited and nervous about the two-man rit challenge, which involved two firefighters running in full gear 50 feet to reach a 150-pound dummy. The firefighters then drag the dummy to the starting point, grab a hose, then run across the field with the hose together to the starting line.

Tharpe said the exercises are meant to reenact firefighters entering a dangerous situation to rescue an individual, then coming back outside to fight the fire.

Capt. Matthew Lamotte said he has enjoyed the day, and was looking forward to the competition.

Kenny Berkley with the Keysville Volunteer Fire Department said this has been the 18th year the department has competed in the event.

Keysville was awarded second place during the one-person hose challenge where contestants removed two ends of a hose and attach the hose to a nozzle in the quickest time, performed by Nick Zumbo.

Taking part in the two-man rit with Drakes Branch was Tharpe and volunteer Derek Roister.

Following the end of the race, timekeepers announced that Drakes Branch won third place for the two-man rit.

The Farmville Area Habitat for Humanity’s Charlotte County Chapter recently received a grant that will allow the organization to continue... read more