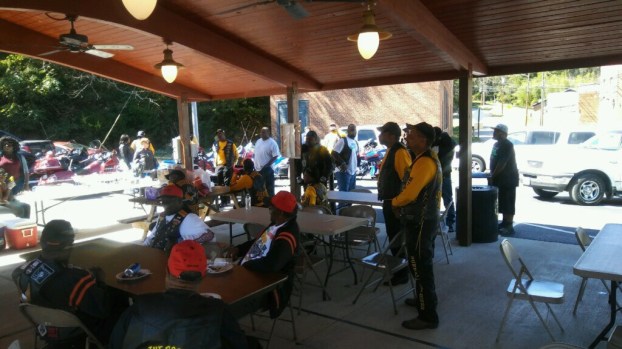 Participants of a motorcycle ride to raise support and awareness for George Roberts’ family enjoyed a meal and fellowship headed by the Buffalo Soldiers Motorcycle Club in Charlotte County on Saturday.

Members of the Buffalo Soldiers Motorcycle Club made the most of a beautiful Saturday morning by not only riding through the Heart of Virginia countryside, but pooling resources together to raise support and awareness for a Charlotte County family.

The club presented a donation to Jacoby Roberts and his mother, Cassandra Roberts, family members of George Roberts during the event.

Aliased “Heavy G,” George Roberts is the charter vice president of the chapter.

The route for the ride traveled out of Drakes Branch to Keysville and Charlotte Court House.

Last July, George and Linda Roberts, of Drakes Branch, were involved in a devastating motorcycle accident while traveling home from Florida.

According to a press release from redbasket.org, which sponsored a fundraising campaign last year in honor of the Roberts family, “Linda and George were thrown from their motorcycle after suddenly losing control. Linda was found across the interstate under a guard rail, and George was unconscious after landing on his head. Both were rushed to hospitals to be treated for life-threatening injuries,” officials said in the release.

This effort is one of many the club has supported in recent months.

The trial for a 73-year-old Keysville man charged with three counts of aggravated sexual battery of a juvenile has been... read more