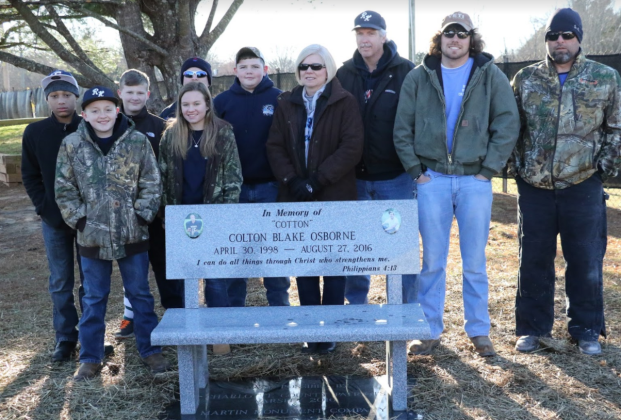 Photo by Titus Mohler Members of the Charlotte County Patriots varsity youth football team and friends of the late Colton “Cotton” Osborne gather with his family around a memorial bench the team helped create in his honor that now stands near the entrance to Bankston Field at Randolph-Henry High School. The bench has recently become part of a legal conflict due its inclusion of a Bible verse and its presence on public school property. Pictured, from left, are Maurice Hurt, Caleb Tucker, Hayden Mills, Chastity Dunaway, David Locey (behind Dunaway), Devin Letterman, Teresa Osborne, Eddie Osborne, Dylan Osborne and Chris Tucker.

The memorial bench honoring Colton “Cotton” Osborne placed just inside the front gate of Bankston Field at Randolph-Henry High School (RHHS) in March is facing the prospect of either alteration or relocation.

Among the words inscribed on the bench is a Bible verse, the presence of which on a memorial located on public school property has been deemed illegal due to the First Amendment’s establishment clause.

Charlotte County Public Schools (CCPS) Division Superintendent Dr. Nancy Leonard said the First Amendment’s establishment clause “prohibits government from establishing a religion and from favoring one religion over another or from favoring religion generally over nonreligious beliefs. Public schools are required to adhere to the laws in order to receive public funding such as state and federal funds and to avoid legal consequences. Charlotte County is a rural school system that relies primarily on those public funds to provide an education for our students.”

The Charlotte County Patriots varsity football team, which plays in the Charlotte County Youth Football League, dedicated the ornate bench to the Randolph-Henry athletic department in Osborne’s honor during a brief ceremony just prior to the start of the Statesmen’s 2017 varsity baseball season March 16. Osborne’s family, including his parents, Teresa and Eddie, were present.
Osborne was a former Patriot and Statesmen, a multi-sport athlete who graduated from Randolph-Henry in May 2016. He died in an all-terrain vehicle crash on Aug. 27, 2016.

Teresa Dunaway, who is running to represent her district on the Charlotte County School Board, was instrumental in helping make the bench a reality along with the Patriot players, which included some of her grandchildren.

She noted that after the fundraising, planning, creation and dedication of the memorial, there had been no conflict at all until Sept. 21.

“Teresa, Colton’s momma, texted me and told me that (RHHS Athletic Director Chris) Holt had called her and told her that the Bible verse had to come off the bench or it had to be moved because it was illegal,” Dunaway said. “And she called me because she didn’t purchase it. We did. And I said, ‘Why is it illegal now if it wasn’t illegal eight months ago? If they knew it was illegal, why did they allow us to put it there?’”

Revealing when the Bible verse was first brought up as an issue needing to be addressed, Leonard said, “It came to light with additional requests for memorials at the beginning of this year. Development of policy was needed to know how to process these requests so that all individuals being memorialized could be treated fairly regardless of race, color, creed, religion, national origin, age or gender.”

Leonard said that as she consulted with the school board attorney, Craig Wood, to develop policy for processing the new requests, “previous memorials were reviewed as part of that process of developing policy. Our school board attorney advised that the placement of the bench had caused a significant ‘religious establishment’ problem.”

She noted that the school system’s response to this situation is two-fold.

“First, since being advised by our school attorney that CCPS has a memorial that violates the law and we are at risk for a lawsuit by the ACLU (American Civil Liberties Union), administration has been working privately with the (Osborne) family to get their input as to whether to move the bench to another location that is not owned by a public school, remove the verse or cover the verse,” Leonard said, adding that the school system would pay for any alteration or relocation. “Secondly, draft policy is being worked on with the school board attorney regarding pending and future requests for memorials. That policy would have to be reviewed by the board and voted on by the board in open session for adoption.”

Dunaway, giving her reaction to the announcement that the Osborne memorial is deemed illegal, said, “I’m shocked. My heart is broke. My grandson has cried and cried and cried. He actually made a speech the night we dedicated the bench.”

She said the young Patriots players, to whom Osborne was a role model and friend, wanted to create a visible tribute to his memory, and they went about raising the funds and coming up with the idea of the bench.

“This is what’s making me the maddest — not only Teresa’s and Eddie’s having to go through this, but these children that were trying to do something to help heal a community, it’s like it’s being ripped away from them,” she said.

As for why the Osborne memorial’s conflict with the law had not been acknowledged before the creation of the bench and its March dedication, Leonard gave a brief account of how the bench came be.

“Last year, a community member indicated an interest to high school administration to give a bench for the baseball field in memory of a student,” she said. “The next contact was that the bench was ready and had been placed. It was not what anyone from the school administration expected to see at the entrance of the athletic facilities. However, it was a loving gesture, so we let it be.”

Leonard said that this year, two more memorial requests arrived, including one for another memorial bench, highlighting the need for policy on placement, specifications, maintenance costs, responsibility for ownership of damages, future use of school grounds and fairness and equality to all students.

“I asked that all requests for memorials be placed on hold until a policy could be developed and brought to the board for adoption so that we could proceed fairly and equitably with all requests,” she said.

In describing the process of how the Osborne memorial came to be, Dunaway noted that she spoke multiple times to both RHHS Principal Robbie Mason and Holt, who is also assistant principal.

She said that Mason referred her to Holt, and she told Holt what the Charlotte County Patriots had in mind.

“We wanted to do a bench,” she said. “… And so I told him, I said, ‘Now, it’s got a Bible verse. If it is a problem if it’s going to have a Bible verse, let us know now.’ I said, ‘We would like to place it at Randolph-Henry, because Colton played there, and we knew our kids, one day, hopefully would play there. And so, he said, ‘Well, I don’t think it’s a problem, but I’ll have to check.’”

She said that he referred her back to Mason, so she repeated the information to Mason, mentioning the Bible verse.

“I stressed that,” she said. “It has a Bible verse. And I said, ‘If it’s an issue, we need to know, because we’ve got the funds, the bench has been ordered, we just need a placement for it.’ I said, ‘So, if we cannot place it at the school, we’re going to find somewhere else,’ which we had in mind was the Wylliesburg ballpark, because (Colton) played up here too.”

Dunaway said that Mason said he did not think it would be an issue but that he would check and that she should touch base with Holt to learn the final decision.

After speaking again with Holt, asking if the bench could be placed, as conceived, at the school, Dunaway said, “He called me back and said, ‘That’s not a problem,’ because the school was not purchasing it or, like, a teacher or the staff. It was purchased by individuals. They didn’t see any problem in it placing there.”

She said that Holt then made arrangements with her to meet and discuss where exactly to put the bench on school property. She said he also arranged to be there when the bench was placed and told her of plans for the dedication ceremony.

When asked for comment Friday regarding the legal conflict involving the bench, Holt said, “All of those questions need to be directed to our superintendent.”

Leonard closed her comments on the situation by saying that “this is a legal issue confronting our school system which could jeopardize state and federal funding which we rely on to educate our students. We are a public-school system. We cannot pick and choose which laws we follow.”

Randolph-Henry High School Principal Robbie Mason has announced that Mitchell Davis has been named a Commended Student in the 2018... read more