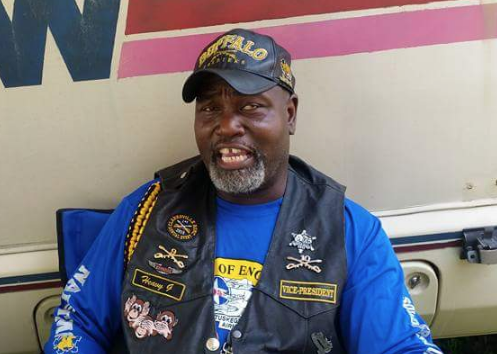 A ride for ‘Heavy G’

The Buffalo Soldiers Motorcycle Club of Southside Virginia will sponsor “A Ride for Heavy G” on Saturday starting at the Drakes Branch Pavilion.

The event will celebrate George Roberts, a Buffalo Soldier, and proceeds will assist with his son, Jacoby Roberts.

Roberts is the charter vice president of the chapter.

According to Buffalo Soldier Dearrion G. Snead, the event is being held in honor of Roberts as the only place he has ever lived is Charlotte County.

Last July, George and Linda Roberts, of Drakes Branch, were involved in a devastating motorcycle accident while traveling home from Florida.

According to a press release from redbasket.org, which sponsored a fundraising campaign last year in honor of the Roberts family, “Linda and George were thrown from their motorcycle after suddenly losing control. Linda was found across the interstate under a guard rail, and George was unconscious after landing on his head. Both were rushed to hospitals to be treated for life-threatening injuries,” officials said in the release.

One-hundred and twenty-five dollars was raised during the campaign.

According to Snead, the proposed route for the ride will travel out of Drakes Branch to the stop light at the intersection of Crafton’s Gate and Kings Highway.

He said the riders will make a left at the intersection and follow the road into Keysville and continue through Charlotte Court House before making the loop back to Drakes Branch.

Snead said chicken plates will also be for sale during the event for $5 starting at noon. The plates will include a meat with two sides and bread.

According to its website, “the National Association of Buffalo Soldiers and Troopers Motorcycle Club (NABSTMC) was established in October of 1993 in Chicago, Illinois, by Kenneth “Dream Maker” Thomas. Dream Maker found the NABSTMC for the purpose of fostering unity and fellowship with motorcyclists in the Chicago area.”

The website notes there are more than 100 chapters nationwide and overseas to date who place a strong emphasis on providing community service.

The Drakes Branch Pavilion is located at 4900 Main St.