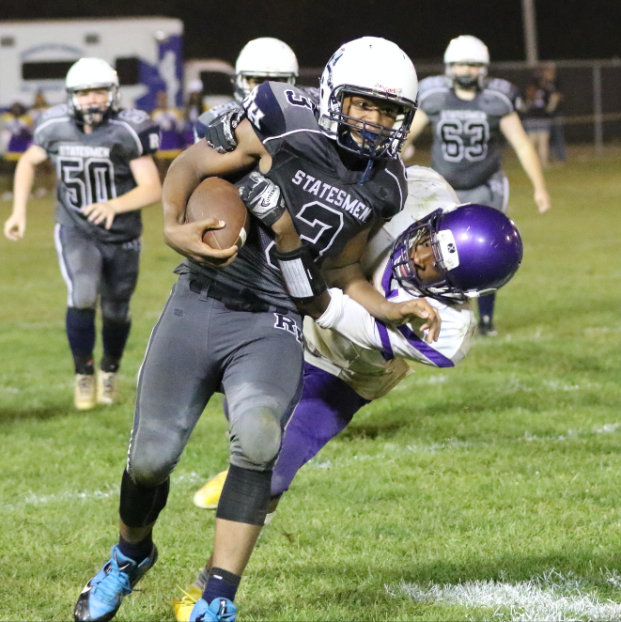 Randolph-Henry High School junior Treymon Roberts gives the defense of visiting Prince Edward County High School something to be concerned about Friday night during homecoming. The Eagles won 55-40 but received a challenge from the growing Statesmen. (Photo by Titus Mohler)

The contest was a fitting addition to the recent series between the Eagles and the Statesmen.

But Statesmen Head Coach Zach Orlando saw plenty of reasons to be upbeat.

“I thought the fight was there,” he said. “I thought we fought them tooth and nail all the way. The problem we’re still having is, defensively, we’re spotting too many points early on, and then offensively, when we start trying to fight our way back into the game, we have too many mistakes. I thought this was a game we could have won…”

The first quarter set the tone for the night, with Prince Edward holding a 21-12 lead after the first 12 minutes of play.

The Eagles, who were also able to spread the ball around, pushed their advantage to 35-12 after two big pass plays for touchdowns in the second quarter.

Then the Statesmen responded, with sophomore Tyrik Beattie returning the ensuing kickoff to the Prince Edward 35-yard line. On the first play from scrimmage, senior Tyrie Blow-Tydings ran the 35 yards to make the scoreboard read 35-18 with nine minutes and 13 seconds still to play in the first half.
Prince Edward returned the next kickoff to the Randolph-Henry 30-yard line, and shortly thereafter, the Eagles scored on a 15-yard pass to help make it 42-18 with 6:56 remaining.
The Statesmen responded with a productive drive capped by a 26-yard touchdown run from junior Treymon Roberts. The score was 42-26 after a successful run for a two-point conversion by Beattie with 1:06 on the clock.
Prince Edward wasn’t ready to break for halftime yet, though, as the Eagles drove down and reached the end zone on a short, patient run to help make the score 49-26 at the conclusion of the first half.
To open the second half, Randolph-Henry put together a promising drive, but it ended with a turnover when the Statesmen fumbled and Prince Edward recovered.
Long runs by senior quarterback Zion Lewis helped put the Eagles on the doorstep of another score, but then an interception caught by senior Aaron Crawley gave the ball back to Randolph-Henry on its own five-yard line.
A few plays later, freshman Peter Jones connected with Crawley for a 60-yard a pass, as Crawley took the ball all the way to the Prince Edward 37-yard line. The Statesmen continued to drive, and Blow-Tydings scored on a five-yard run, creating a score of 49-32 with 1:55 left in the third quarter.
The scoreboard read 55-32 after Eagles converted a touchdown on a 59-yard touchdown run with 1:12 to go.
Beattie returned the ensuing kickoff to the Prince Edward 10-yard line. With 22 seconds remaining until the fourth quarter, Blow-Tydings found the end zone on a four-yard run, and Jones ran in the two-point conversion to make the score 55-40.
“They were excited to play,” Eagles Head Coach James Ford said of the Statesmen. “It’s their homecoming, of course. … And they gave it to No. 22, that Blow-Tydings kid, and he ran the rock. He ran the rock hard, and we had a hard time tackling him. And hats off to him and the rest of that team. The o-line that blocked for him, we had a hard time getting those guys down. And then they had really good speed in (Beattie) and (Roberts) … So, it was a battle. It was a battle.”
The Statesmen recovered a Prince Edward fumble just before the start of the fourth quarter, but they ended up turning the ball over on downs with 10:18 left in the game.
The Eagles were unable to respond offensively and punted. Randolph-Henry drove the ball to the Prince Edward five-yard line, but then a bad snap led to a turnover, with the Eagles recovering the ball at their own 20.
They punted the ball back with just under two minutes to play on a strong kick, and they were able to keep the Statesmen from cutting into their 15-point lead.
Randolph-Henry (0-4) visits Amelia County High School next Friday at 7 p.m.

Preparing for the Eagles