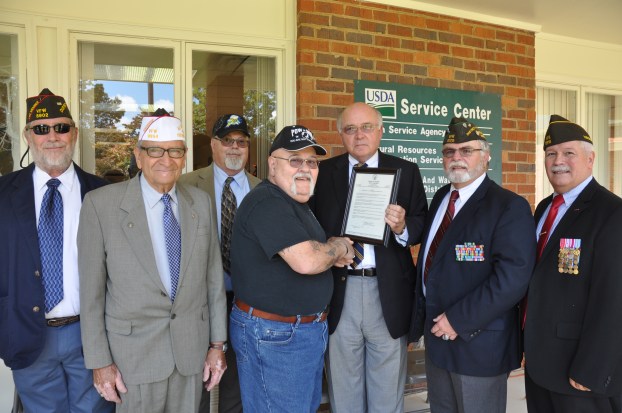 Members of the VFW Post 8902 and those who participated in the POW-MIA Day ceremony pause for a photo. Pictured are, from left, Monroe Tuggle, Gus Villalobos, Donnie Smith, Ken Porter, County Administrator R.B. Clark, Garland “Butch” Hamlett and Greg Eanes.

lle VFW Post 8902 gathered to remember prisoners of war (POW) and those service men and women reported missing in action (MIA) during the annual POW-MIA Day at the Charlotte County Administration Building’s lawn.

During the event, Charlotte County Administrator R.B. Clark presented a resolution acknowledging the POW-MIA Day of Remembrance to VFW leaders — one approved by the county’s board of supervisors.

“The history of this nation has been shaped by brave men and women in the armed forces who have answered the call of America’s highest duty … While we honor our veterans for their strength, service and sacrifice, it is equally important to remember service people who have been prisoners of war or who remain unaccounted for or are missing in action,” Clark said, reading the resolution to the crowd.

“Father, may we never forget their service,” said Post Chaplain Donnie Smith. “May we never forget the service and sacrifice of their families. Father, I pray that each year we would always take pause to remember the great sacrifice that many POWs and many MIAs have made for this country and the freedom it represents.”

Monroe Tuggle explained a table in the corner of the lawn, which included a chair shrouded in black, a single red rose, a single plate and an upside down glass.

“This table is our way of symbolizing the fact that members of our profession … are missing,” Tuggle said, explaining each part of the table and its meaning. “The table is set for one, it is very small, symbolizing the frailty of one person against his oppressors.”

During his keynote address retired Air Force Col. Greg Eanes, who serves as the mayor of Crewe, discussed Confederate African-Americans who were prisoners of war during the American Civil War.

“This will transition into my reflections about current attacks on Virginia’s war memorials,” he told the audience.

“As a military historian I say that sadly, what is not adequately recognized is the Confederate service of Virginia’s African-American population, both freemen and slaves,” Eanes said, noting recent scholarship into primary source documents allows the identification of about 3,400 men and women. “This number reflects a little less than three percent of the 120,000 Virginians reported by the Virginia State Library as having served in the Confederate Army and does not include raw numbers reporting men working in certain war industries; numbers that significantly increase the percentage of known African-American participation.”

Eanes said wartime and post-war documentation shows the black Confederate “had his share of heroism and danger. Whether conscript or volunteer, they were a vital element of the Confederate war machine. Many of these men were killed in combat and many became prisoners of war.”

Eanes offered specific examples of the voluntary service African-Americans offered during the war for the Confederate cause.

“At least 36 black Confederates are listed as having been formally paroled with Lee’s Army at Appomattox,” Eanes said. “One black Confederate still resisting was Paul Armstead of Co. H., 22nd Virginia Infantry. He appears in Confederate records as a chief cook and as a corporal. He eventually surrendered at Lewisburg (now West Virginia) and was paroled as a prisoner of war on April 26, 1865, more than two weeks after Lee surrendered.”

Eanes said while there was still extensive work to do in identifying and transcribing wartime rosters, “the public record is clear that these men were a critical part of the Confederate war effort. They performed duties considered akin to ‘active military service’ — service that would gain them ‘veteran status’ by the standards of today. They may not have been infantry, but they were doing ‘soldier’s work’ and ‘soldiers’ in all but name. They were without a doubt veterans, recognized and referred to as such by their white contemporaries and state governments in the post-war period. ‘Black Confederates’ were not myth. They are fact. As we have seen, some of them became prisoners of war. Primary source documents are clear on these points.”

He said that, during the mid-1800s, “slavery was the abortion issue of its day, with constitutional, legal and moral questions for that generation. Questions that were further complicated by its ties to economic and congressional balance of power implications.”

Ken Porter, the commander of the post, said following the ceremony that the event drew “a nice turnout,” noting he wanted the issue of those missing in action and prisoners of war to become more public.

Tollett, of Hampton, became involved. She’s the president of the Virginia Volkssport Association. “The AVA is our national organization. It’s... read more