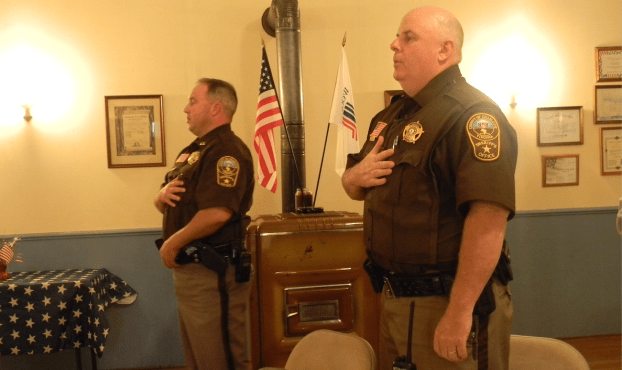 Pictured, from left, Charlotte County Sheriff’s Deputies Randy Grissom and Scott Everhart stand at attention as they recite the Pledge of Allegiance during the 9/11 ceremony Monday.

WoodmenLife Chapter 179 held a special ceremony in Wylliesburg on Monday to honor the heroes and victims of the Sept. 11, 2001 terrorist attacks.

The ceremony, titled “In Honor and Remembrance — Woodmen Salutes America’s Heroes,” payed homage to community heroes in the area, including police officers, firefighters, rescue squad personnel and members of the armed forces.

“It’s hard to believe it’s been 16 years since we all remember the events of that day,” said Chapter Auditor Bonita Hamlett.

She said she expected it is a memory that everyone will have for the rest of their lives.

Hamlett said 16 years ago she first saw the events unfold while in a bank as they had the news on the TV.

“As you think about it, it is something that has impacted each of our lives,” she said.

Speaker Red Moore said his hope and prayer was to never forget.

The guest speaker for the afternoon was the Rev. Dr. Bill Chrystal. He said when the Sept. 11 attacks occurred, “I was in Reno, Nevada.”

In light of the events, he said the most important thing he could do was to make sure the doors were open to his church so individuals could come in and pray.

“Since 2002, WoodmenLife chapters across the country have been dedicating flag poles and presenting flags, not only to honor the heroes and victims of Sept. 11, but also the men and women of our armed forces. … ” said Chapter Secretary and Reporter Annette Clowdis.